Arnold’s side eclipsed numerous records on their way to the plate, including setting a new points record in the A-League, and the Sky Blues Head Coach believes his squad is the best in Australian Football history.

“We showed our attitude, our mentality of winning throughout the whole team and we want to win more,” Arnold said post match.

“At the start of the season we didn’t even talk about the points record but you change your goals as you go.

“With probably about eight rounds, nine rounds to go, we spoke and I felt that the way we were going we’d wrap it up with four or five games to go and then it was about what can we motivate them [the players] with next and it was all about driving them to history.

“I don’t think people really realise how big this is, I don’t think you’ll ever see this again, or in my lifetime, 66 points from 81 is crazy,” he continued.

“25 goals at home and we conceded 3 in the whole season at home. On the history side of it we’ve broken that many records and we’ll continue to do it. The belief I have every week turning up to the game is that we’ll win and I know the players are the same.

“The stats show we are the best team in the history of Australian Football. 16 team competition, 65 points in the old NSL. We broke a record of the best team, statistically ever in Australian football history.” 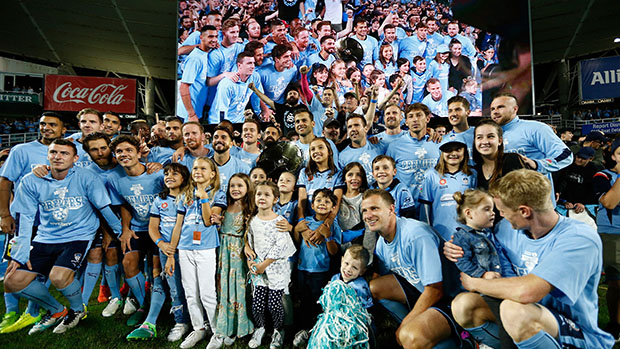 Arnold revealed it was the mentality of the substitutes and reserved that spurred the Sky Blues to their title triumph, as he praised the family nature of Sydney FC for supporting the squad through their 27 rounds of football.

“When you have such a wonderful group of people that have such a great relationship with each other and the club provides every piece of help they can for the players  then it’s quite easy to keep the team motivated,” he said.

“The secret was around when you have a bench so strong. At the start of the year we spoke about performance being the indicator of who plays and it’s probably scared a few of them because they’ve played exceptionally well throughout the 27 rounds.

“I have to be closer to players number 12 to 20 and communicate more and help them because the ones that are playing are all happy.

“Dimitrijevic figured in 20 games, Ibini figured in 20 odd games, Matt Simon the same came on a lot of games, so the most important thing is to make them feel a part of everything.

“I appreciate more the character and attitude from those players more than 1 to 11 because they’re so supportive of their team mates. We are a family club that treats the wives, the children, everyone as equal and the players appreciate it.”

Sydney FC have a week off before returning to action in the Hyundai A-League Finals Series. Stay tuned for ticketing and match information.