Sydney FC Head Coach Graham Arnold has called on his squad to lift their performances to another level leading into the final round of the 2016/17 regular season on Saturday.

Arnold has said there’s always improvement left in his record breaking squad, and for Saturday’s final round clash against the Jets at Allianz Stadium he’s called for a performance excelling the 80% already on show.

“I wasn’t happy with last week’s performance, so Saturday against Newcastle it’s all about getting back to the 70 or 80 percent and it’s time to go higher,” Arnold said.

“This weekend’s game against Newcastle is one of three big games and it’s about winning those three.

“It’s about performing to the best of our ability, having high standards and trying to set and make a big statement in the A-League that we want to be noted as one of the best teams in history.

“Yes we’ve broken records so far on this journey and we’ll continue to do so with these last three games.”

Set to lift the Hyundai A-League Premiers Plate on Saturday post match, Arnold said the achievement was massive and as big as claiming the Championship.

“For me it is the biggest [the Premiers Plate] with the Championship trophy,” he said.

“I don’t think you can split to two. One is for the most consistent and best team, the team that has prepared properly and performed best over the 27 weeks, and the other one is a knockout competition of the six best teams. 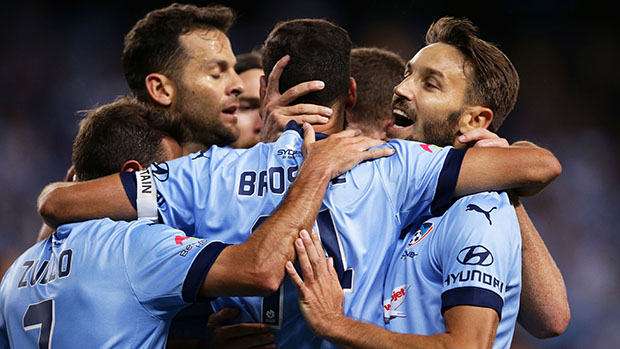 “I got six or seven other text messages from other coaches after the Perth Glory game saying ‘well deserved you’re by far the best team in the league this year’, and that shows you how the other coaches respect the Premiership trophy.

“There’s prestige on both trophies but I think it’s disrespectful if people downgrade the Premiership trophy. It’s something that’s been rewarded for 27 weeks of hard work and good performance.

“I had the privilege of winning the Championship trophy at the Mariners, it’s a good feeling, it’s a very important trophy, but we need to respect also that the Premiership is a massive feat,” he continued.

Sydney FC take on Newcastle Jets in their final match of the Hyundai A-League 2016/17 regular season as they collect their second Premiers Plate at Allianz Stadium. Be there and back your Sky Blues.