Sydney FC will receive the Hyundai A-League Premiers Plate this Saturday following their final home game of the regular season against Newcastle Jets at Allianz Stadium (kick off 5.35pm).

The Sky Blues have had a remarkable season becoming the only team to have remained outright top of the Hyundai A-League after every single round – the first club to do this in over 40 years of Australian football.

They have also recorded the most wins, most clean sheets, the longest unbeaten streak to begin a season, as well as the highest A-League winning margin.

The ten-goal striker will say a few words to the crowd before re-joining his team mates off stage to raise the trophy amid a hail of Sky Blue streamers.

All players will embark on a lap of honour following the lifting of the trophy wearing special Premiers t-shirts. 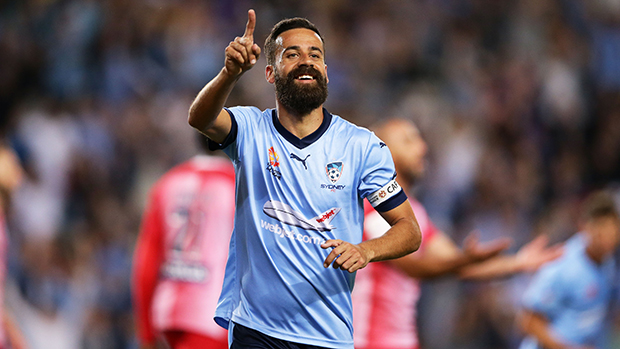 “It should be an incredible occasion for all involved and a fantastic opportunity for our Members and fans to show their appreciation of what the players have achieved this season,” said Sydney FC Chief Executive Officer Tony Pignata.

“We asked to receive the trophy on the final day of the season because the family friendly kick off time means a lot more people will be able to see our presentation.

“I’m looking forward to it immensely and am excited to be part of an electric atmosphere.”

Aside from the football action on Saturday there will be lots of other events happening at Allianz Stadium before and during the game.

Family tickets of just $50 means this Saturday afternoon will be a Family Fun Day Out and everyone can come along to watch the Sky Blues presented with the Premiers Plate.

Charity partner the Sydney Children’s Hospital Foundation will be collecting donations in the precinct pre-match, to raise money to fund ground-breaking research and everyday clinical care.  It’s a fantastic initiative which the club encourages all Members and fans on the day to support.

Pre-match there will also be a range of kids’ activities outside the stadium including face painters and an array of football games in the forecourt.

Inside the stadium there is a jam-packed pre-match show including the final of our annual toddler race, the Member’s Lucky Row prize, and the ITP Fan Scan.

At half-time we’ll have the last Webjet challenge for the season, plus the annual Mascot Race!

Full time will bring the moment everyone has waited the last three weeks to see when Sydney FC is presented with the 2016/17 Premiers Plate plus a lap of honour to round off a fabulous day.

Sydney FC take on Newcastle Jets in their final match of the Hyundai A-League 2016/17 regular season as they collect their second Premiers Plate at Allianz Stadium. Ensure you’re following Sydney FC across all social media to keep up to date with all the days’ activities.