Sydney FC have been held away at Melbourne City after dominating a match in which they created a hatful of chances.

The Sky Blues fired in 19 shots on the Melbourne City goal but went behind in the 36th minute through an Aaron Hughes header.

Milos Ninkovic scored early in the second half with a neat flick but Fornaroli put City ahead again with a header eight minutes later.

With 12 minutes to go Ninkovic restored parity with a header after great work from Holosko to head back across goal.

A late chance to Shane Smeltz in injury time almost won the game for the Sky Blues but the chance was hit over the bar.

“John (van t’Schip – Melbourne City Head Coach) changed the system to a back five and we had to change our defensive way as well.  John did that stop the penetration behind their full backs because first 20 minutes we killed them and should have benefitted from those chances.

36’ HUGHES GOAL – A left wing Melbourne City corner from the left hand side is floated across and Aaron Hughes powers home a header.

52’ NINKOVIC GOAL – O’Neill feeds Blackwood who runs into the box and plays the ball wide to Holosko who crosses to Ninkovic at the near post to produce a neat backheel flick beyond Sorenson.

60’ FORNAROLI GOAL – Novillo gets clear on the right hand side of the pitch and chips the ball to Fornaroli around 12 yards out to power a header beyond Janjetovic.

78’ NINKOVIC GOAL – Gersbach plays a long cross to the far post where Holosko heads back across goal for Ninkovic to rise first and head home.

3’ HOLOSKO CLOSE – Good ball by Ninkovic to Hoole who plays a fabulous ball across goal which a sliding Filip Holosko is only inches away from guiding into an empty net.

5’ HOOLE SHOT WIDE – Hoole beats four Melbourne City defenders and opens up a clear shot on goal but drags it just wide of the far post with his right foot.

9’ HOLOSKO SHOT BLOCKED – Blackwood gets to the byline and pulls the ball back for Holosko who has a shooting chance on goal but Clisby is back to block at the last minute with the goal gaping.

10’ NINKOVIC SHOT SAVED – Ninkovic jinks his way into the box to open up space for a shot on goal but Sorensen saves with his legs.

18’ BLACKWOOD CHANCE – A long ball from O’Neill is missed by Hughes which puts Blackwood in the clear with Sorensen off his line but the youngster can only lob a bouncing ball wide of the post.

29’ HOOLE SHOT SAVED – Hoole is played in clear on goal on the left hand side of the box but his powerful shot is tipped over by Sorenson.

30’ BLACKWOOD GOAL DISALLOWED – Ninkovic chips the ball from the left hand side to the far post to Holosko who heads back across goal to Blackwood to finish but the goal is ruled out for off-side against Holosko.

35’ JANJETOVIC SAVES – Novillo drives at the Sydney FC defence and unleashes a 25 yard shot which Janjetovic brilliantly tips over the bar.

39’ HOOLE SHOOTS WIDE – Hoole finds himself inside the box and creates space to find an opening but curls his shot just wide of the post.

41’ BLACKWOOD HEADER SAVED – Hoole chips the ball from the byline across the penalty area to Blackwood who puts a free header at Sorenson.

69’ KOREN FIRES WIDE – Novillo puts Koren clear on goal but the striker smashes the ball wide with only Janjetovic to beat.

89’ GREAT SAVE JANJETOVIC – Novillo battles his way into a shooting opportunity and shoots from an angle but Janjetovic is there to push the ball behind.

90’ + 2’ SMELTZ CHANCE – A ball played to the back post which Naumoff forces towards goal and from two yards out Smeltz can only turn the ball over the bar. 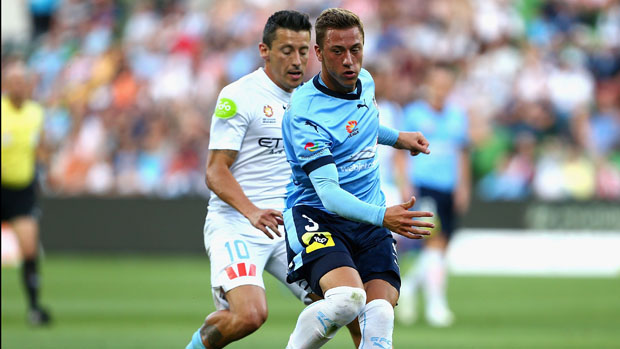 Head Coach Graham Arnold brought back marquee Filip Holosko from suspension to replace the injured Alex Brosque.  The Sydney FC skipper’s place in the number 9 position was taken by George Blackwood while Holosko moved to his usual position of right wing.  Shane Smeltz returned to the bench for the first time in two games and was joined by Christopher Naumoff. Seb Ryall was named captain in the absence of Brosque, and Smeltz and Faty from the starting line up.