The Sky Blues were never in any trouble as they sailed into a 2-0 lead within the first seven minutes; Iraqi midfielder Ali Abbas slotting home a penalty kick after Corey Gamiero was brought down and Bernie Ibini netting his first goal for the club.

Scoring machine Gameiro made it 12 goals in nine pre-season games just before the half time, capitalising on a goalkeeping mistake, while record goalscorer Alex Brosque and Nick Carle put away second half goals to ensure a comfortable win and hand Graham Arnold his eighth win from nine matches in charge of Sydney FC.

Graham Arnold:  “It was a very good hit out after ten days without a game.  This was by far our best performance with the ball and the progression is getting better.  Tonight was more about giving minutes to players who needed to catch up and you could tell by their freshness that it was good to get them back out there.

“I was very pleased with our attacking movement tonight and the way we moved the ball.  I was also very pleased with the young boys as they get fitter and stronger every week and a special mention to Aaron Calver who did very well in central defence.”

Pedj Bojic:  “Very happy with the result but more happy with the performance and that’s the most important thing. It’s always tricky playing against the state league teams because they want to impress which they did but we stuck to what we needed to do which was play good football and the end result is we won.

“Every game in pre-season is important. Obviously we want to win them all but you also want to build on what you are looking to do and at the minute we are doing that and playing some great football.” 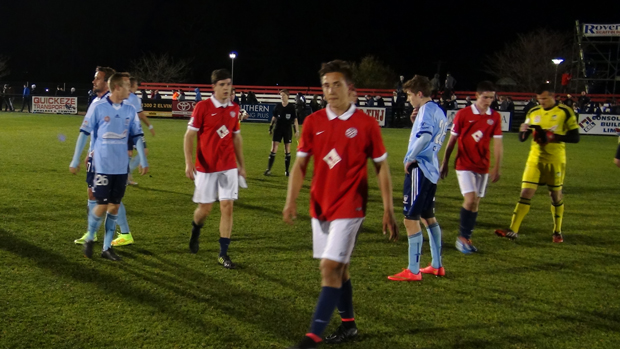 5’ ABBAS PENALTY – Nikola Petkovic swings over a free kick from the left wing which is headed back across goal by Calver to Gameiro. The striker turns to shoot from eight yards but is impeded by a stray leg from a Canberra FC defender and miskicks, forcing referee Cropper to point to the spot.  Penalty taker Ali Abbas makes no mistake stepping up to slot home into the bottom corner.

7’ IBINI GOAL – Ball played down the left hand side to Brosque.  Sydney FC’s Australian marquee beats his defender and with the Canberra FC goalkeeper inexplicably on the edge of his area in no man’s land, the former Socceroo crosses to Ibini who side foots into the empty net.

45’ GAMEIRO GOAL – Canberra goalkeeper Jacob Cole attempts a pass out to his right full back but Gameiro has cut down his angle and Cole plays the ball straight to the Sydney FC striker. After taking a touch to control the ball Gameiro smashes it back past him and into the net.

74’ BROSQUE GOAL – Sydney FC’s Max Burgess picks up the ball midway inside the Canberra FC half and drives towards the box. The midfielder unleashes a right foot shot from 20 yards which is parried by keeper Konstantinou and falls to Brosque 12 yards out who buries it.

85’ CARLE GOAL – Dylan Caton gets to the byline on the right of the Canberra box and cuts the ball back to Nick Carle who is unmarked from six yards out to side foot home and make it 5-0 to Sydney FC.

10’ GAMEIRO CHANCE – A burst from Bernie Ibini down the Sydney FC right flank sees him break clear of the Canberra defenders.  His cross to the far post is met on the volley by the sliding Corey Gameiro but he mistimes it and the ball bobbles in front of him to the keeper.

13’ JANJETOVIC SAVE – Forward Oloriegbe makes a nuisance of himself in the Sydney FC box and after a scramble on the right edge of the six yard box, he fires in a shot which Janjetovic gets a right hand to by his ankle, to push clear.

15’ GAMEIRO SHOT SAVED – Gameiro uses his pace to break away on the left hand side of the penalty area and strikes a left foot shot across the keeper Cole who dives full length to push around the post.

36 BROSQUE SHOT SAVED – Carle plays a ball to Alex Brosque who digs it out from under his feet on the edge of the box to shoot towards goal.  The keeper reads it well and is out to block. Gameiro puts the rebound over the bar.

42’ GAMEIRO HEADER JUST WIDE – A left footed free kick from Petkovic on the left wing is flicked towards goal by the head of Gameiro but it goes just wide of the far post.

49’ NECEVSKI DIVING SAVE – A ball into the Sydney FC box falls to the feet of Tilley 12 yards out.  The youngster takes an early shot and Necevski scrambles back across his goal to save with his midriff.

60’ SHOT FROM HALF WAY TIPPED OVER – Tidmarsh shoots from just inside the Sydney FC half forcing the back-peddling Ivan Necevski to superbly tip over the bar.

90’ CATON SHOT SAVED WELL – Substitute Dylan Caton intercepts a pass inside the Canberra half and bears down on goal.  The youngster gets just inside the penalty area and shoots, but keeper Shaun Burke dives brilliantly to his right to push the ball clear.

Graham Arnold gave chances to a number of players to improve their match fitness while he rested a few more with a view to games against Wellington Phoenix and Sydney United in the FFA Cup in the next two weeks.

Nick Carle, Peter Triantis and Alex Gersbach came into the starting line up from the team which beat Brisbane Roar to win the Townsville Football Cup, while youngster Aaron Calver was given his chance alongside Nikola Petkovic at centre half.