Table Toppers Perth Glory extended their lead on the Hyundai A-League ladder with a late come from behind win against Sydney FC at Allianz Stadium on Thursday night.

The Sky Blues dominated the second half and took the lead through a 55th minute chipped Shane Smeltz penalty after Dino Djulbic had handled inside the penalty box.  Danny Vukovic pulled off a remarkable one handed save from Terry Antonis four minutes later as Sydney FC searched for a second goal to kill off the game.

However a Rostyn Griffiths header from a free kick and an Andy Keogh penalty in the final seven minutes secured the points for Perth to snatch victory at the top of the table.

Graham Arnold: “I have to say I think that’s the best we’ve played over the last month, or three games let’s say. I thought today we controlled big periods of the game. We had disruptions during the week but overall there were a lot of positives to come out of it but it’s disappointing to lose in the last five minutes.

“There was a lot of space either side of Rostyn Griffiths and we tried without Janko to go with an extra midfielder to open up space for Brosque and Bernie and it worked well at times.

55’ SMELTZ PENALTY – Sydney FC attack down the left hand side through Smeltz and Gersbach with the latter crossing to Ibini at the far edge of the penalty area. Ibini plays the ball back to Smeltz and his goalbound shot hits the arm of Djulbic inside the area to give the Sky Blues a penalty.  Shane Smeltz steps up to take and chips the ball delightfully down the middle of the goal as Vukovic dives left out of the way. 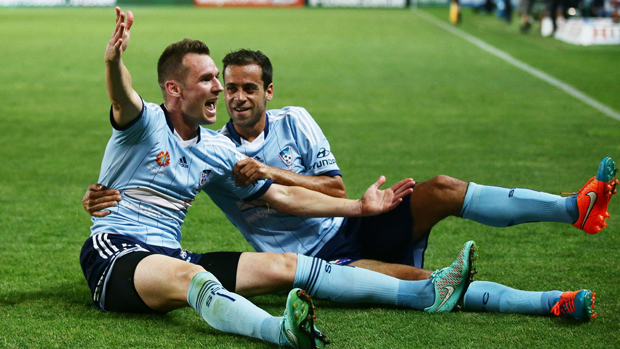 83’ GRIFFITHS GOAL – Marinkovic swings in a curling right footed free kick from the right hand touchline and Griffiths rises unmarked to power home a header inside the box.

86’ KEOGH PENALTY – Jamieson makes a darting run through the Sydney FC defence, goes down under a challenge and the referee Miliner awards a penalty despite Sky Blues players’ protestations.  Andy Keogh steps up to send Janjetovic the wrong way and seal the win for Perth.

8’ JANJETOVIC SAVE – Nichols finds space inside the right hand side of the box and fires a low shot on target which Janjetovic saves with his legs.

34’ JURMAN BLOCK TACKLE – Keogh is played clean through but Jurman comes from nowhere to make a last ditch tackle as the strike pulls the trigger.

36’ IBINI SHOT SAVED – Antonis played the ball out wide right to Ibini, the Socceroo plays a one-two with Rhyan Grant, before he beats his defender and aims a right foot shot at goal which Vukovic has to push wide.

53’ ANTONIS VOLLEY WIDE – Terry Antonis catches the ball perfectly on the volley from out wide on the right and fizzes it across the face of goal and just past the post.

59’ ANTONIS SHOT SAVED – A break away by Sydney FC from a Perth attack is led by Smeltz who feeds Ibini on the right. He beats his man and centres for an unmarked Antonis who shoots goalward, but Vukovic raises his left hand to palm away a certain goal. 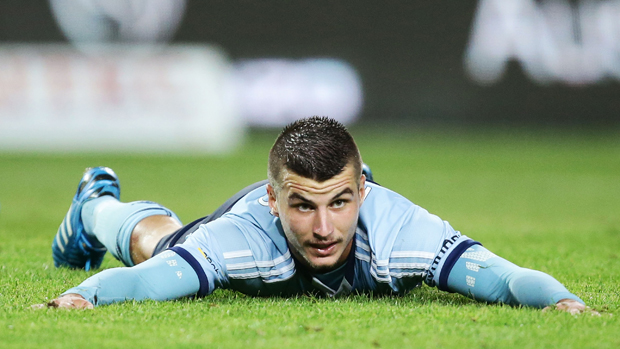 Graham Arnold recalled Matthew Jurman into the heart of the defence at the expense of the suspended Seb Ryall.  Striker Marc Janko succumbed to a slight groin injury which meant Shane Smeltz moved to a more natural centre forward role while Milos Dimitrijevic returned to the midfield.  Rhyan Grant continued his role in place of the injured Ali Abbas.  Peter Triantis and Aaron Calver joined Bouzanis, Naumoff and Nick Carle on the bench.

THE BIG GAME PACK – Sydney FC face some tough competition in a short space of time and we have bundled the games together for a great package, with savings of over 30% on single game ticket purchases.