Sky Blues Top After Another 4-0 Thrashing

Sydney FC recorded their third straight 4-0 win in the Hyundai A-League with another demolition job, this time on Central Coast Mariners.

Sydney FC recorded their third straight 4-0 win in the Hyundai A-League with another demolition job, this time on Central Coast Mariners.

The Sky Blues sit top of the ladder on six points having scored eight goals and conceded none so far this season.

A double strike to Filip Holosko and a goal each from Bobô and Alex Brosque did the damage with the Sky Blues now having scored 20 goals without conceding in their last six domestic competition games (including Westfield FFA Cup games).

Sydney FC travel to Canberra on Wednesday to face Canberra Olympic in the FFA Cup semi-final.

Graham Arnold: “I thought that we pressed at the right times exceptionally well, won the ball back in their half where we needed to win it back and capitalised very well.

I think the stats showed we had 17 shots to 5 and we missed some good chances, but overall it’s a good performance at home.

“I was happy to come back to Allianz after the derby, perform like that in front of our home fans, score four goals and send our fans home happy.

“We were ruthless in the final third, 4-0 is a fantastic score line, but we’ve got more goals in us.”

Milos Ninkovic: “Me, Filip, Brosquey, Carns, we already played together last year but now it is better because we understand each other better than last year.

“This year we started the pre-season very well and we’ve just continued it into the season.”

18’ HOLOSKO GOAL – An inch perfect defence splitting pass from Ninkovic releases Holosko for a run on goal and Slovakian makes no mistake with a first time finish on the run.

38’ BOBÔ GOAL – Ninkovic lifts a pass into Bobô inside the box, the striker takes it on his chest only for Poscoliero defending, to lift the ball over his own keeper and allow Bobô a simple tap in on the goalline.

65’ HOLOSKO PENALTY – Bobô is man handled in the box by McGing and the referee points to the spot.  Holosko steps up and fires it straight down the middle.

70’ BROSQUE GOAL – Neill takes a thrown in to Necevski but the keeper mis-controls and plays it straight to Brosque who wins a scramble with Faty and fires into an empty net.

2’ BOBÔ CHANCE – A bad back pass from Neill goes straight to the Brazilian striker who beats one man but Tavares is back to tackle him before he can get off a shot.

32’ ZULLO SAVING TACKLE – Powell splits the defence with a through ball to release Buhagiar but Zullo makes a last ditch tackle as he looks to shoot.

33’ CARNEY SHOT JUST WIDE – Carney shoots on the run from the left inside pocket but the ball takes a deflection and curls just wide of the post.

36’ NINKOVIC CHANCE – Mariners give the ball away to Holosko inside their own half who feeds Ninkovic but the Serbian is pressured and can only managed a tame shot at Necevski.

37’ O’DONOVAN SHOOTS WIDE – O’Donovan is released in the left channel but the Irishman is forced wide and shoots into the side netting.

45’+1’ HOLOSKO CHANCE – Carney’s in-swinging right wing free kick is met by Holosko seven yards out but he sees his shot fly over the bar.

59’ VUKOVIC SAVE – A cross from the Mariners right wing finds O’Donovan who guides the ball towards the bottom left corner but Vukovic is down well to get a right hand to the ball and Brillante clears.

72’ VUKOVIC SAVE – O’Donovan drives down the right hand side and fires a low shot across the goal which Vukovic is down quickly to smother.

85’ GRANT HITS THE POST – Rhyan Grant bursts forward from his own half, evades a number of tackles, plays the ball out wide to Simon.  Simon crosses back to Grant and the wing back gets a toe to the ball but can only watch as it cannons off the post and to safety. 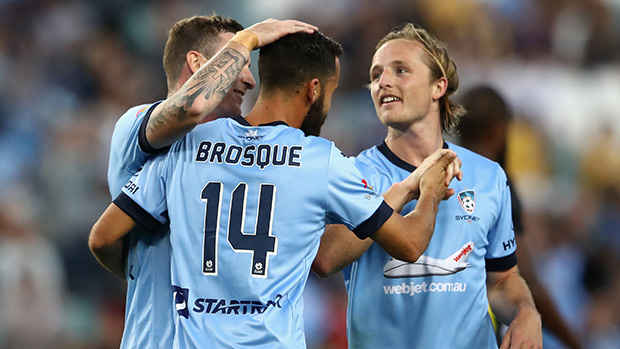