The 4-2 result came despite the young Sky Blues taking the lead and the game being in the balance until the final minute.

All could have been very different with the young Sky Blues striking early through Christian Gonzalez and then equalising with more than 30 minutes to play courtesy of Nikola Kuleski.

But a double to former Sydney FC youth product Nikola Taneski, as well as goals to Leigh Egger and captain Brendan Cholakian ensured the Northern Beaches side kept in the race for a spot in the top five.

Sydney FC got off to a lighting start and were rewarded for their early intent.

In the 6th minute the Sky Blues opened the scoring when a sublime Gonzalez free kick hit the back of the net.

The game was fast paced despite much goal-mouth action until the 23rd minute when a Scott Balderson free kick sailed high and wide.

Brendan Cholokian went down in the box in the 27th minute before stepping up to convert his penalty and level the scores.

A strange close call happened for Sydney FC in the 34th minute when a corner from Dejan Pandurevic almost snuck in at the near post only to be denied by some desperation goalkeeping from Mitchell Evans.

Despite a high tempo first half, both sides trudged into the sheds at the break with the scores locked at 1-1. 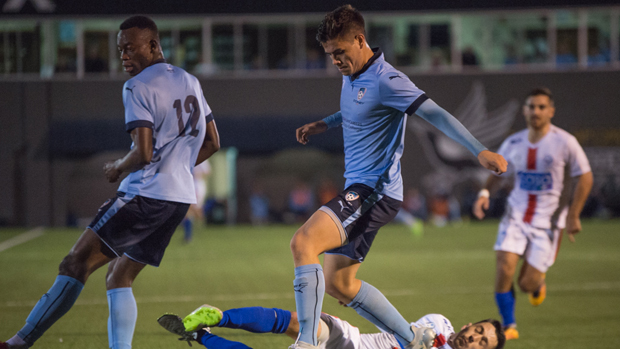 Charles Lokolingoy had a great chance at the start of the second stanza, but he was denied by Dylan Mitchell after beating his man and unleashing a shot straight at the keeper.

Manly United took the lead in the 59th minute when Sydney FC gave away far too much space through the middle. It allowed Cholokian to beautifully thread the ball out wide to Nikola Taneski whose powerful diagonal shot flew straight into the opposite corner of the net.

A foul by Leigh Egger on Daniel Maskin in the box in the 67th minute saw the second penalty of the evening awarded but this time it was to Sydney FC. Nicola Kuleski stepped up to the mark and went straight down the middle as the ‘keeper dived to his right. The scores were now even at 2-2.

In 73rd minute a pinpoint accurate free kick from Cholokian was beautifully turned over the crossbar by Evans. However, from the ensuing corner a header by Egger, as he rose above all and sundry, resulted in a goal to Manly United. The visitors were now back in front.

In the 90th minute a long ball forward reached Taneski and he, with a wonderful diagonal shot, drove it hard and straight into the far corner of the net for his second goal of the evening.

Sydney FC coach Robbie Stanton was pleased with his team despite the loss and paid a lot of credit to his players.

“We showed really good character and I was really pleased how we got back level with them at 2-2,” he said.

“Sammy McIllhaton made his debut for us tonight and he was outstanding I thought.

“I am probably the only coach that is happy when you lose, but I am happy with the team because we played well, handled their build ups and got in some good forward runs.

“We just lacked that execution when we needed it. We are fighting to get goals and we got two but that wasn’t enough to win. We are learning the lessons every week and I can see our players growing.”

Manly United’s coach Warren Grieve was delighted with his team’s away win.

“We were due a win after the disappointment of last week,” he said.

“The boys were tremendous, they dug deep, stuck to the plan and we got the result.

“I have been very impressed by the way the team has been flexible with formations because of our injuries. The players’ understanding of their roles was very impressive for me, even though some haven’t played many minutes. We moved the ball around well tonight and controlled the game from the first whistle to the last.” 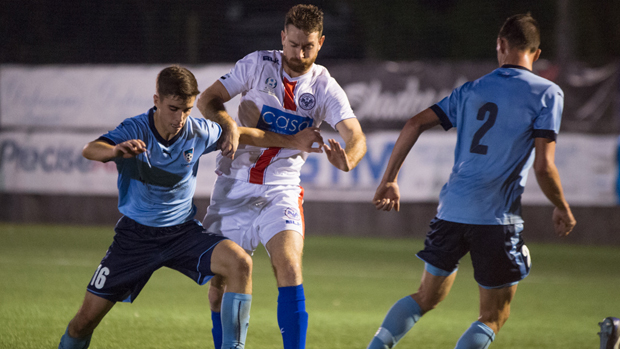