Having earned a week off for winning the Premiership, the Sky Blues came up against a confident Mt Druitt who had accounted for third placed Bankstown City the previous week.

Sydney FC were impacted with the call up of George Timotheou, Patrick Flottman, William Mutch and Chris Zuvela on Young Socceroos duty, however their replacements Matt Green, Liam McGing and Andreas Agamemnonos more than filled their boots.

GALLERY: Check out @_FCBaller_’s shots from out semi-final win.

It was dominant start from the Sky Blues and after two minutes Juan Zapata slipped into the penalty and shot on goal only for the keeper to save the ball with his fingers tips.

In the 5th minute a quickly taken free kick put Charles Lokolingoy through but his effort was blocked on the line by some desperate defending by the Rangers.

Sydney FC didn’t have to wait long for the breakthrough when on 12 minutes Zapata pounced on a loose ball in the area to shoot home from close range to give the Sky Blues a 1-0 lead. 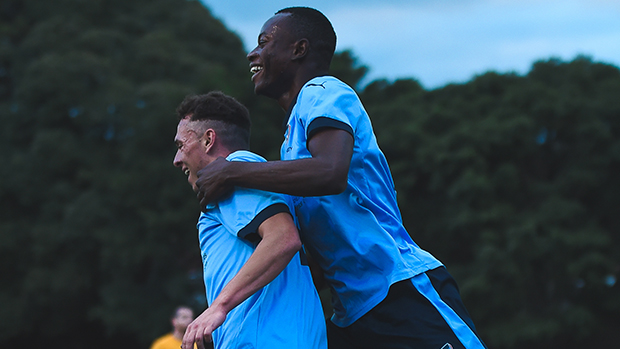 The lead was almost doubled ten minutes later following a dazzling 50 metre run by skipper Daniel Araujo, who released Daniel Maskin on the right side but the winger wasted the chance as he blazed over the bar.

With the possession stats strongly in favour of Sydney FC the opposition were content on the direct route with long balls into the Sky Blues half. The biggest threat faced by the Sky Blues came from set pieces but the Sydney FC backline of Nicola Kuleski, McGing, Green and Brendan Curtis stood firm against the barrage.

The second half opened with Mt Druitt enjoying a good 15 minute period of pressure from a series of corner kicks and free kicks but Sydney FC were equal to the challenge and then settled back into control of the match.

Zapata had two great chances to extend the lead with one shot skewing just wide of the post while the other lobbed just over the cross bar.

On 72 minutes the league’s Golden Boot, Charles Lokolingoy, powered his way by two defenders to slam the ball inside the near post to bag his twenty sixth goal of the campaign for a 2-0 margin.

The match was wrapped up in the 80th minute when Zapata grabbed his brace as he rounded the keeper and slotted home the third to make it 3-0 and game over.

The result completed a hat trick of Grand Final appearance for Sydney FC as the Under 20’s defeated Central Coast Mariners 6-0 and the Under 18’s defeated Northern Tigers 1-0 earlier in the day.

It means the NPL 2 Grand Finals on Saturday, 17th September will be a triple decker derby showdown as all three match ups (1st grade, U20 & U18) are Sydney FC versus Western Sydney Wanderers.