If you’ve been following my articles you’d know by now I’m a bit of a sports fan. Just a bit. But don’t ask me what my favourite sport is, like my local newsagent did yesterday, because I simply can’t answer that question. So many give me so many different emotions, highs, lows, passions…it’s hard to name a ‘favourite’.

I will say though that the Australian Open is my absolute favourite time of year…so that has to be saying something. I have visited Melbourne to watch the tennis for the past 10 years witnessing Roger the Great win the 2010 Australian Open, Novak Djokovic win the 2013 Open and most recently Federer again taking out the Australian Open 2018 for a record 20th Grand Slam win on Sunday night. I’ve also been to the Soccer World Cup in Germany, Sydney 2000 Olympics, numerous NRL Grand Finals, The Melbourne Cup and a Grand Prix, to name a few. All are exciting on different levels.

There is however another significant event that takes place on the sporting calendar in January, currently in its sixth year in Melbourne, the Australia Day Big Blue clash between Melbourne Victory and Sydney FC. It has become a huge fixture in the A-League. Make no mistake the rivalry between these two teams is real, and at times quite unfriendly, so Friday night’s clash was always going to make for a real spectacle especially with Sydney as victors in last year’s A-League Grand Final. 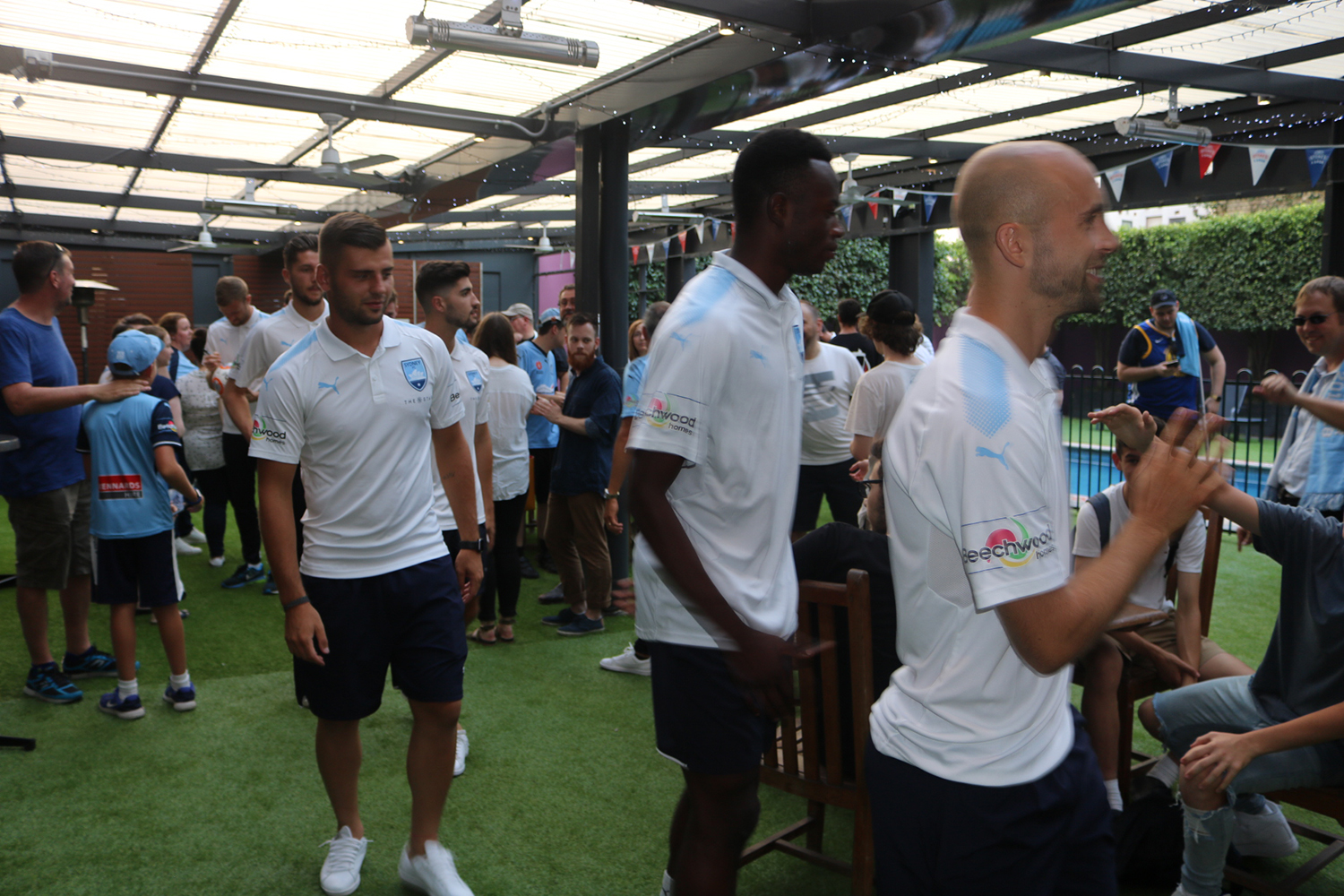 This year was my first time to the Australia Day clash and first visit to AAMI Park. Oddly enough, as often as I’ve visited Melbourne in January, I have always missed the game by a day or two. I do remember though seeing the fans from both sides in its inaugural year travelling to the game but as a sports fan who often attends games on my own, I was a little apprehensive going to a home ground whose opposition supporters are also so passionate. But I bit the bullet this year and was very glad I got to witness the hype and atmosphere of this massive game. All in the company of my lovely cousin who is a Victory fan, so friendly fire was exchanged throughout the night.

A great initiative in the lead up to this game is a Members only meet and greet with the A-League and W-League teams the night before. The teams make an appearance for half an hour and mingle with passionate, travelling fans. What a wonderful opportunity and experience it was. I was expecting an ‘us and them’ presentation with players not so easily accessible, merely signing autographs, but it was literally a square area with a free for all, not overly busy, autographs, photos, honest conversations…whatever you desired. I was super impressed. Take a bow Sydney FC, this was an event organised very well. 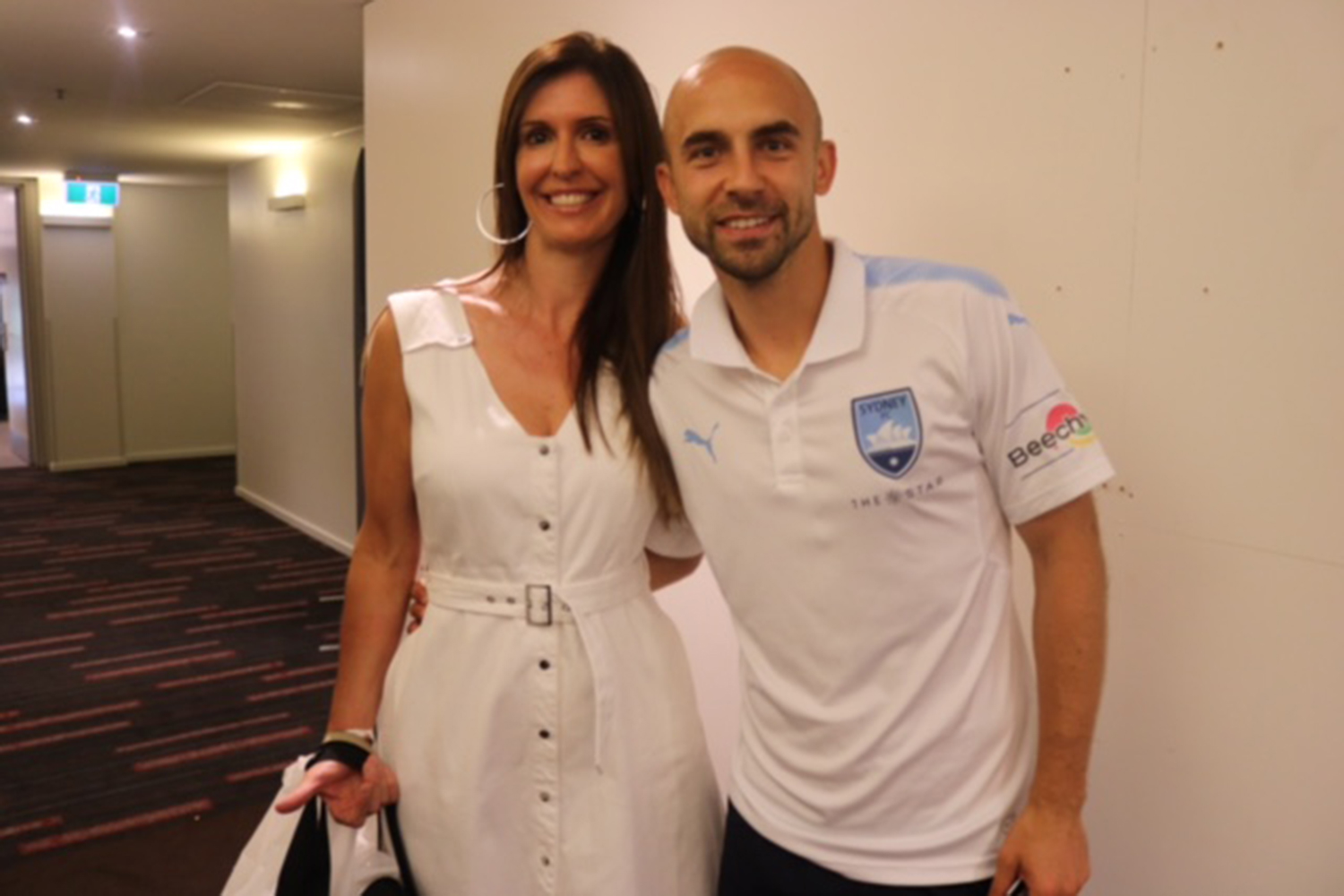 It is so refreshing for sporting clubs to seriously and genuinely acknowledge Members and fans. Members only events where true supporters can have a raw and honest meet up with players of their favourite team is priceless. Something they have with them forever. I myself won’t forget the experience, I can only imagine how the little ones felt.

Whilst I’m sure the players don’t have a say in the matter, they seemed genuinely content on being there. For the first time, meeting A-League players, a couple of things struck me. Firstly how lean they are. Maybe I’m used to seeing NRL players, being a part of the Parramatta Eels Members Council, but these guys are seriously trim. Almost skinny, but of course each code has its own physical requirements and it was apparent they are seriously fit. Secondly what genuine people they appear to be. No bravado, no sleaze, no arrogance. There was nobody rushing off because they didn’t want to be there, they asked me almost as many questions as I asked them which is refreshing from professional athletes who commonly have so many asking of their time. And thirdly was how witty they are. They all had something quite funny to say at some point.

The first player I crossed coming out of the lift…whilst putting on his shirt (my camera was a couple of seconds too slow) was superstar Adrian Mierzejewski. A total class act on and off the field. I asked for a photo and he almost hesitated for a second as he was the last to join his team mates, then said ‘Yes, of course’. After a quick snap we were both at the doorway to the meet and greet and I insisted he go first to join his team mates but he wouldn’t have it. He wouldn’t walk through the door first. Lovely act. I then expressed my gratitude on behalf of not just Sydney fans but all A-League supporters at having such an amazing talent in Australia. He was very humble with the compliment. I told him my entire family ‘go for the other Sydney team’ but even my dad says what a superstar he is. And my dad doesn’t give out too many Sydney FC accolades. Adrian’s response? ‘You are the only Sydney FC supporter? You are the lucky one’. I really laughed. Nice one Adrian, and totally agree. I asked if he would be playing for Poland in the World Cup in Russia and he answered with quite an emphatic no. Which left me puzzled. Either the Polish national team are seriously fabulous or the coach has no idea what calibre of player he has playing here in Oz. They are really the only two scenarios as to why this man is not playing at World Cup level. I personally believe Adrian is up there as one of the A-League’s best with Del Piero, Villa and a couple of others. What a masterclass he is to watch.

Then came my favourite current Sydney FC player. Nin.ko.vic. Ole, ole, ole!!! Another gem. I said to him you are a wonderful player, I worry we may lose you to an overseas team. Ninko’s response? In his notable Serbian accent…’No worries, in five weeks I will be an Aussie, so all good.’ Ha!! Already spoken like a true Aussie. Are these not the sweetest words a Sydney FC fan could hear? I then said ‘So you’ll be good to play for Australia in June?’ He laughed and said ‘No I can’t, I have already played for my national team’. And that is a sad shame for us. It was also impressive how he took the signing process very seriously, telling me exactly how to hold the jersey whilst he signed. And what a signature it is…the size of the number!!! No sign and move along attitudes with our Sydney guys! Very pleased to have my jersey autographed by the man himself. Quite possibly my first autographed jersey ever. And I have some jerseys!

I could go on as I was pleasantly surprised at the friendliness of the guys but we only had half an hour and I was keen to speak to as many as I could. Being a high school teacher of young males, I’m always looking for inspiration to take back to the classroom and Luke Wilkshire and Brandon O’Neill were extremely friendly and knowledgeable men. The experience left me with a lasting and upmost positive memory of our Sky Blues. I just wish I got to tell David Carney that I think he’s great and asked Adrian how to pronounce his surname…correctly. The last person definitely worthy of a mention is our fearless leader Graham Arnold. When asking for a photo I said, ‘Please don’t go anywhere’. Now I was making a cheeky dual reference here…don’t go anywhere as I’d like a photo and don’t go anywhere and coach anyone else! Arnie’s response? ‘I’m not.’ He got it. Two words, and we never know what is going to happen in sport, or life in general really, but I’m taking that quite reassuringly and as a sign he is as committed to our club as us Members and fans are. Again as I mentioned to him, Sydney are lucky to have him as coach.

Overall, my very first Australia Day Big Blue clash was a positive one. I feel fortunate I was able to witness for myself the atmosphere I have only ever been privy to watching on TV which promised to be nothing short of amazing, and it didn’t disappoint. One of the most passionate I’ve been amongst. Two lovely Victory fans next to me shook my hand at the end of the game and said ‘We hope you enjoyed your first experience to AAMI Park’. Nice gesture. So a meet and greet with our reigning Premiers, A Big Blue win and a Roger Federer victory just to top it off, I’d say weekends don’t get much better than that.