Celebrating Members’ Week this week, we’ve selected five of our most distinguished Members – ranging from our most senior, to our first ever paid Member, youngest and more!

JOAN GARRICK – Our most senior Member

Joan Garrick, our 94 year old Member was lucky enough to walk out with the squad before a match in 2017.

“My son was watching in London. He paused the TV, photographed it and sent it to me by text while I was still in the stadium. I have two sons in England, one in London, the other in Leeds. They are able to watch the matches in real time and we text each other while the match is in progress and then have phone calls afterwards. Its just brilliant – I feel as though they are sitting beside me.”

“I am passionate about women’s football. I have played football with Canterbury Junior Football club, as a goalkeeper for about 14 years. In 2018 I had to stop playing as a goalkeeper as I had injured my shoulder and won’t play in goals ever again, 2019 saw me play on the field and I managed to score my first goal ever!”

Elise was born on November 7 and is the granddaughter of 16 year Foundation Member Greg Braude, pictured holding Elise.

Greg’s daughter Jessica has been a Member for 8 years and son-in-law Travers joined the Sky Blue family 5 years ago.

“Love Sydney, went to a few NSL games and I never quite connected.

“When I learnt we were getting our own team, one that represented all of Sydney, I just had to dive in. I played football really badly for 25 years and just loved the game.

“Have stuck around since day one because once I got a taste of that first year I was hooked. I have never been one to change or drop a team once I start supporting them even through the lean years I just had to stay a Member.” 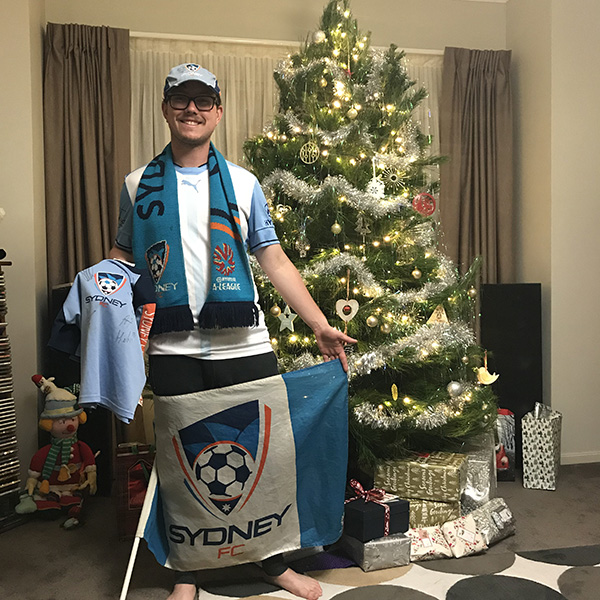 “My story is really a typical football upbringing. Being a young lad and playing football meant that when the A-League came to existence, I was always going to see the games. It has been a long 16 years with many lows but very dizzying highs too.

“Going from thinking that Dwight Yorke was Sydney FC (“Sydney score a goal!”) to following each player and learning the tactics we play has been a wonderful journey.

“Supporting Sydney has always been a family experience for me as well, from Dad carrying me to the car after the late kick offs in Season 1 and now that I’m older going on away trips in multiple states with my Mum, Dad & brother.

“Some of my prized possessions involve Sydney FC memorabilia such as the old season 1 scarf and flag to the first shirt I ever got as a fan. Wearing hearing aids but still being able to hear the roar of the Cove and the passion of the fans is one of the reasons I keep watching the games. Sydney FC was my first love in football and it will always be the biggest.”