How Social Media Reacted To Our Premiership Win

The title win sees Sydney FC set a new record for Premierships won (four), with the Sky Blues heading into the Finals Series looking for a record-breaking fifth Championship.

Here’s how social media reacted to the Sky Blues’ success on Saturday.

A word from CEO Danny Townsend

Very proud of everyone at the club and our ridiculously loyal Sky Blue members and fans. It’s been a long road and the Premiership is the hardest trophy to win. Congrats to Steve, the amazing group of players and staff at @sydneyfc #sydneyisskyblue #premi4rs 👕💪 🏆

A celebratory drink from Alex Baumjohann

How many Premierships Will Smith?

Arshavin sums it up

Our Partner Association ESFA with the congratulations 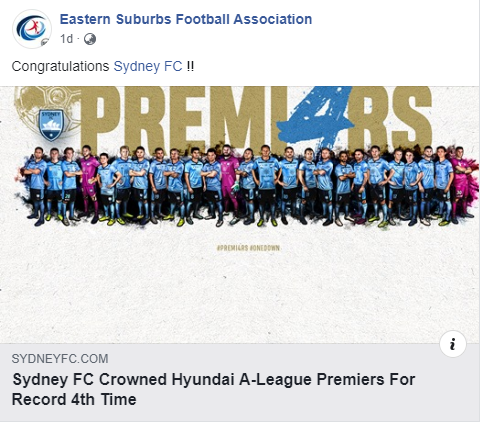 A shout out from Teqball

A congratulations from our proud partner Under Armour

Our Captain gets a shout out from John Hutchinson

Congratulations @SydneyFC for winning a 4th premiership. Well done @alexwilkinson84. Great person and wonderful leader. What a career this guy has had.

A word from our former boss

Congrats @drt15 and to Scott Barlow and all your staff, board and players at @SydneyFC Not easy winning a Premiership. Well deserved. Enjoy 😄⚽️ https://t.co/nDZ2PsvQUE

🙌 Congratulations to the players and staff @SydneyFC, who have been confirmed as the 2019/20 @ALeague Premiers 🍽️#SupportingThePlayers pic.twitter.com/dGGWC9np1m

The Office of Sport NSW

Breaking down the stats

In the 4 seasons since 15/16 when @SydneyFC failed to make the finals, they have:

•Been premiers 3 times, Runners-up once

•Been Champions 2 times (with one still up for grabs)