Hoole Hoping To Cement Round 1 Place

Sydney FC attacker Andrew Hoole says he will use Friday’s friendly match against Wellington Phoenix in Wollongong to help secure his place in Graham Arnold’s starting line-up for the round one clash with Melbourne City at Allianz Stadium.

The former Newcastle Jet has started all of the Sky Blues pre-season games so far including the two FFA Cup matches against Sorrento FC and Adelaide United, and despite strong competition from overseas internationals Milos Ninkovic, Shane Smeltz and marquee Filip Holosko, all of whom are beginning to push for a starting spot, Hoole is keen to show he should hold on to his.

“Yeah I’ll definitely be hoping to keep my place.  Obviously once round one comes around you want to have that spot cemented,” said the 21 year old.

“We’ve got some tough competition here with the players and that’s what you want in a team and is exactly what Arnie will be looking for come round one.”

Hoole opened his Sydney FC account with a goal against Belconnen United in a 3-0 win at McKellar Park in Canberra and admits he’s settling in well.

“The first three or four months have been really good.  I didn’t know what to expect making the change from Newcastle to Sydney but I’ve really enjoyed it and the boys have been really welcoming and I’m looking forward to the future with Sydney FC,” he said. 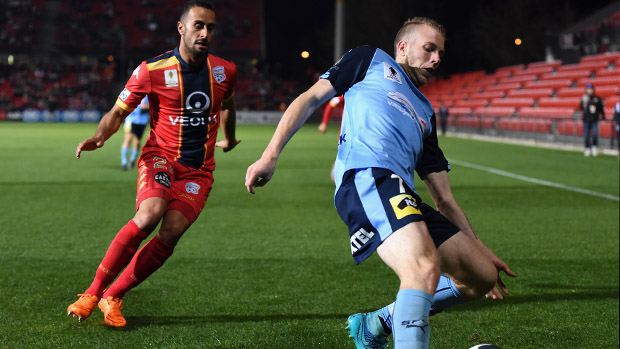 The Olyroos forward also praised the pitch at WIN Stadium after today’s first training session on the ground where they will take on the Kiwis on Friday.

“The pitch was good today, obviously on game day it will be a little bit more wet on the surface and that will suit us because we like to get the ball down and play football, so I’m looking forward to the game on Friday and hopefully we can put in a good performance.”

Kick off at WIN Stadium in Wollongong on Friday night is 7.30pm and tickets can be purchased by clicking here.

Sydney FC A-League Memberships are now on sale for the Hyundai A-League 2015/16 season.   Click HERE to become part of the Sky Blues family