More Sydney FC Members than ever will have the chance to be part of the Sky Blues’ ‘Night of Night’s’ this year with $25 tickets to the annual end of season celebration going on sale for the first time.

The Sky Blue Ball will see Sydney FC’s Players Of The Year awarded their honours in a gala night which will mark the end of the Hyundai A-League 2017/18 season for the Sky Blues.

The A-League squad will be in attendance alongside the Westfield W-League, Foxtel NYL and Academy sides, as well as the Sydney FC Board of Directors and management. 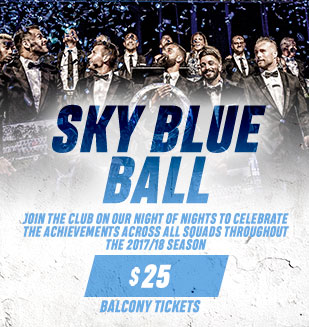 Sky Blues Chief Executive Officer Danny Townsend said: “After such a successful season and last couple of years we wanted to open up our end of season awards and make it easier for as many Members and fans as possible to attend.

“I’m looking forward to a hugely entertaining evening where we celebrate the triumphs we’ve had as a club together and bring the curtain down on another memorable season.

“I’m sure it will be another night to remember.”

The $25 ticket guarantees an allocated balcony seat for Sydney FC’s most prestigious night of the year at The Star Sydney, and will include a cash bar and food facilities, as well as drinks discounts at The Star’s 24/7 Sports Bar, prior to the evening beginning.