Sydney FC’s Bernie Ibini was delighted to have got back on the park, and even more happy to have scored in Sydney FC’s 3-0 FFA Cup semi final win over Canberra Olympic.

The win means the Sky Blues will face either Melbourne sides Victory or City who face each other next Tuesday night in the second semi final at AAMI Park.

It was Ibini’s first game after a broken leg in mid-2015 sent his career into a tailspin while at Belgium’s Club Brugge.

“It’s obviously amazing for me to be finally back on the pitch.

“The medical staff helped me massively and I can’t thank them enough.

“And then to top it off with a goal, yeah, it’s definitely been a great night,” a happy Ibini told Fox Sports after the game.

Ibini, a second half sub, bagged his team’s third goal after Milos Dimitrijevic and Seb Ryall had opened the scoring at Viking Park. 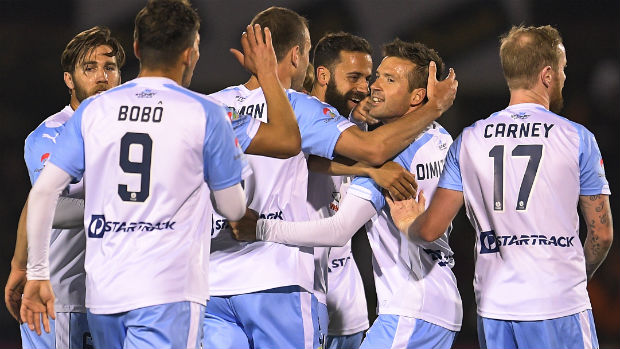 “Simmo [Matt Simon] put a great ball across and I saw him run and I had to run as well because Arnie would probably lose it with me if I didn’t get to the back post,” Ibini said, with a smile.

“I was lucky enough to be there and it was a great ball and I was able to finish it.”

The goal was a sweet moment after having spent much of the last 15 months battling to come back from injury.

He returned from Belgium on loan in the last couple of months but still was not anywhere near full fitness.

Wednesday night was an indication he’s getting back to his former self.

“It was tough, being injured in a foreign country, but coming back here [on loan] being with familiar people, working with Arnie again…

“And to be finally back on the pitch is really amazing,” said Ibini.