Sydney FC Head Coach Graham Arnold has heaped praise on new defender Jordy Buijs, and refused to rule him out of an appearance at Allianz Stadium on Friday night against Adelaide United (kick off 7:50pm).

The Dutch centre half arrived at the start of the week and completed his first training session on Tuesday, and Arnold said he was thoroughly impressed by what the former Feyenoord youth product showcased.

Arnold said the only hurdle in the way of Buijs playing was his visa, however he said Aaron Calver was more than up to the task of filling in again at centre back following an admiral performance in the Sydney Derby last round.

“He [Buijs] has a wonderful mentality,” Arnold said.

“He gets off the plane Monday morning, came in here and wanted to see the stadium and training facilities and he did the medical side of things.

“Yesterday [Tuesday] it was a very hot day and I offered him the opportunity just to do the warm up but he did the whole session. His attitude is he’s here to play football, not a holiday, and he looked very good in training yesterday.

“We’re still waiting for his visa but we’re expecting that back through in the next few days,” he continued. 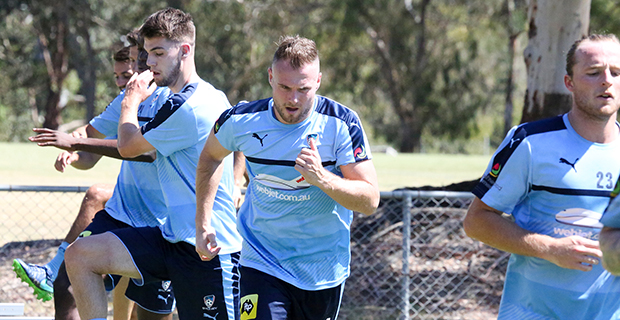 “Calver was exceptional [against Western Sydney], I know the kid has got talent. He’s got a lot of speed at the back and he’s performed well for this club before and in the Champions League he performed well.

“I’ve got a lot of faith and confidence in the kid so there’s no reason why he can’t start again.”

While the Sky Blues extended their Sydney Derby unbeaten run to nine matches, Arnold said he targeting an improved performance against Adelaide on Friday night at home.

The Sky Blues currently lead the table by five points and remain undefeated in their 15 matches in the Hyundai A-League to date.

“The focus, concentration and preparation in on Friday night against Adelaide and we know what Adelaide will bring to the table, we’ll be ready for them and to win the match.

“I wasn’t happy with our performance last week so it’s quite easy [to get the squad up] when there’s a lot of things to look at and improve on.

“I’ve said it repeatedly that we’re only 60 or 70 percent of where we’ll end up. We have a lot of improvement left in this team. Our defence has been fantastic, last week against the Wanderers the first 20 minutes were very good and then after that our standards dropped a little and that’s stuff we need to work on.