Sydney FC full back Michael Zullo described his side’s comeback 2-1 win over second-placed Melbourne Victory as “massive” but played down talk the Premiership was now theirs.

It was billed as the game of the season and while it was more of an arm-wrestle than an open and flowing game, Sydney FC showed another way to win, extending their lead at the top to 11 points with their Australia Day Big Blue win at Etihad.

The Premiership trophy looks very much to be heading to Moore Park, though Zullo, like his coach, wasn’t thinking about trophies.

“Definitely not, we’ve got 10 games to go,” he told Fox Sports when asked if the Premiership was theirs.

“We’re stoked with how we’re going at the moment and tonight the boys showed what we’ve got in us and we didn’t play our best again.

“But we still won. This is a massive evening for us.” 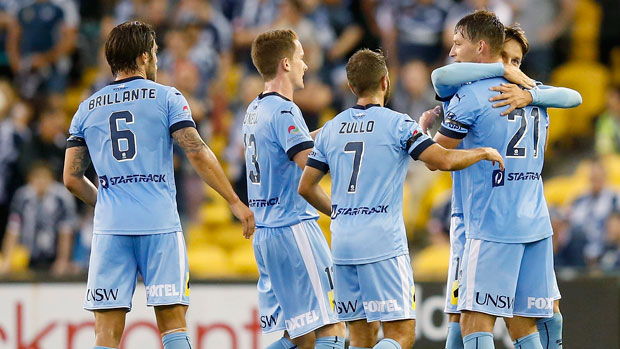 Sydney FC were pinned back early in the game by Victory’s pressing before a tactical change by Graham Arnold – moving Filip Holosko high and wide allowing Aaron Calver to concentrate on his right back defensive duties – gave the Sky Blues more bodies behind the ball to cope with Victory in transition.

And on the left, Zullo was in excellent form pushing forward and trying to keep lively Marco Rojas in check.

“This is a massive game for us. But we didn’t make it easy for us and it was a very difficult evening for myself playing against Marco, he’s a great player.