Sydney FC defender Michael Zullo has sung the praises of new acquisition Adrian Mierzejewski, with the Polish star set for his second competitive match as a Sky Blues on Wednesday night.

Zullo likened the former Trabzonspor winger to 2016/17 Johnny Warren Medal winner Milos Ninkovic, as he reflected on his own season and said the fans can expect even better in 2017/18.

“We definitely feel like we’ve strengthened in some really key areas,” Zullo said.

“Adrian has come in and he looks like a really strong player, but all the reinforcements all over the park seem to have been a step up from last season.

“He [Adrian] is a different type of player to Holosko who he’s come in to replace. He’s more of a footballer on the ground, he likes getting into spaces.

“To me he feels like a Ninkovic but on the right side and left footed. He’s really experienced, calm on the ball and I’m looking forward to playing with him. 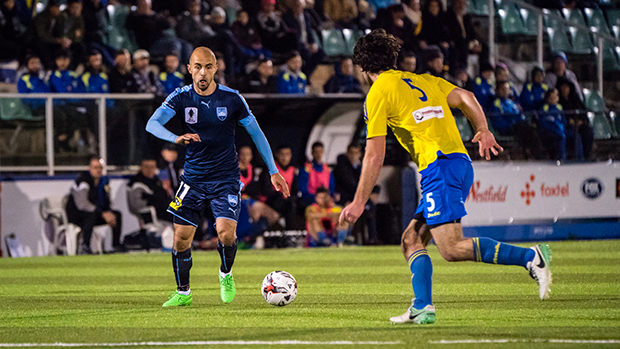 “I think I had a good season last year but this season I think I need to take it to another level. Arnie has a lot of confidence and trust in me and that inspires me to be the best player I can be.”

The Sky Blues left back said he expects the whole squad to rise to the next level as he said he expects teams to be coming after the reigning Champions, starting with Wednesday night’s Westfield FFA Cup Quarter Final against Melbourne City (kick off 7:30pm).

“People will be coming for us this year as Champions but we’re confident of going to another level and being even better than last year,” Zullo said.

“We haven’t discussed last year at all, we’re fully focussed on the Quarter Final, it’s a massive game. Last year is irrelevant, different teams and players.

“It’s a big game, it’s the first big test we’ve had this year and we’ve been preparing all pre-season for this. It’s going to be a good match and we definitely expect to win.”