A ten-man Sydney FC has shown tremendous character to share the spoils against an upbeat Marconi Stallions in a 2-2 draw at Lambert Park on Saturday.

In a first half that had a bit of everything, Jeremy Cox turned home his sixth goal of the season, before he was cancelled out by a James Andrew equaliser.

Despite having Jerry Skotadis sent off, the Sky Blues took the lead through a Hassan Jalloh pile-driver in the 38thminute to go into the break ahead.

Marconi pressed on in the second half, substitute Braden Cheng caused headaches for the Sydney FC defence, but it was a touch of class from Sean Rooney, with a curling free-kick that saw the two sides settle for a draw. 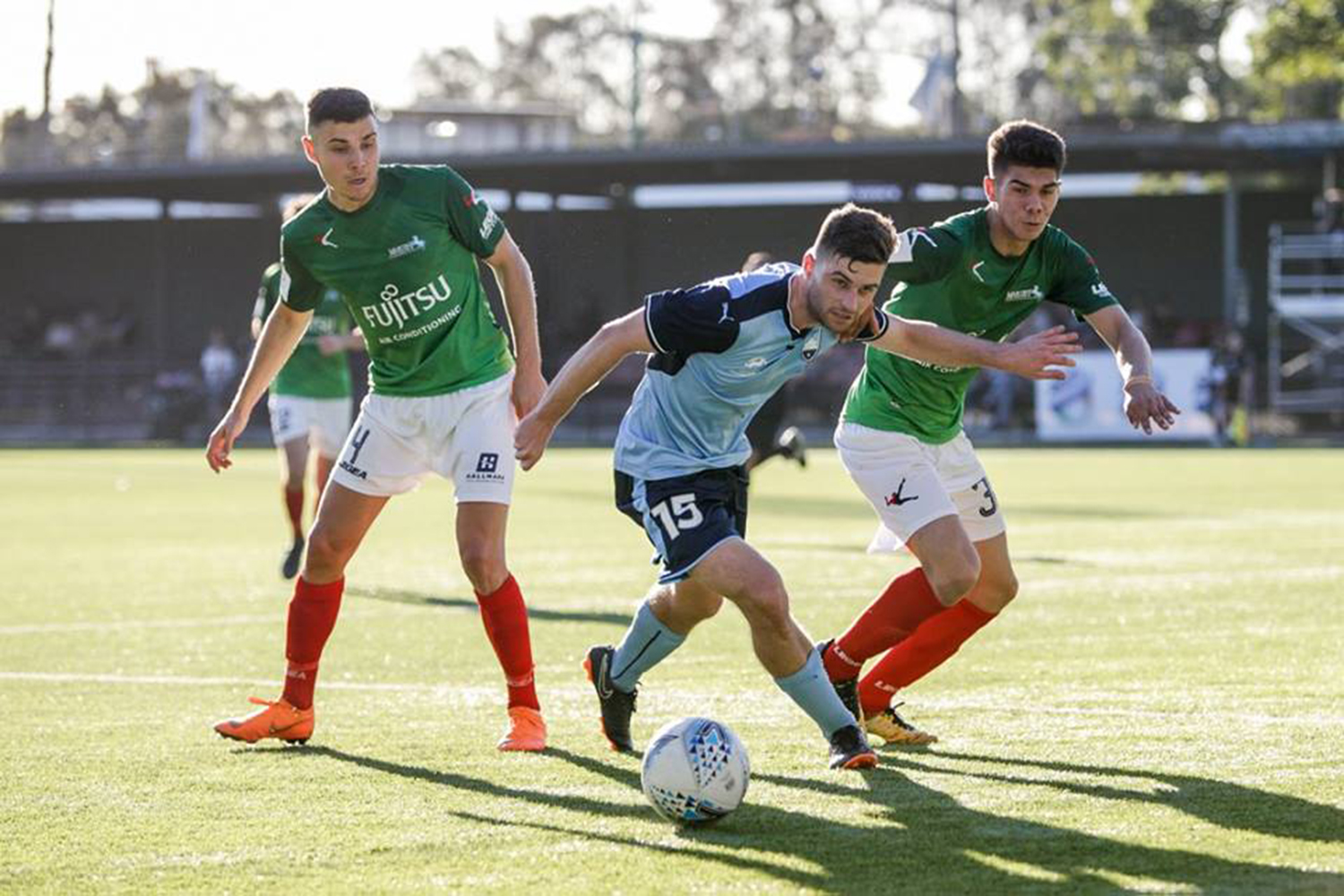 The Stallions came into this afternoon, off back-to-back victories, so the visitors dominated much of the ball for the opening ten minutes.

Sean Rooney had the best chance of the opening exchanges as he tried to hook one back inside that was safely taken by the goalkeeper.

Sydney FC showed their class with a quick counter attack, started by Sam McIllhatton in the centre circle before Cox fired home, his sixth of the season, making it 1-nil.

James Andrew has netted twice in the last few weeks, the pacy striker made it three in three when he slotted home after a well placed angled ball to level the score at 1-1.

It continued to be a game that swung from end to end. Marko Jesic leapt high from a cross that was matched well by Sydney FC custodian Duro Dragicevic to keep the scores locked.

The pendulum of the contest swung again in the 35th when Skotadis was shown a second yellow for simulation in the box. Sydney FC were down to ten men and taking on a vibrant Marconi Stallions team.

Although it was the Sky Blues that took a shock lead. The ball rebounded back to Jalloh, the striker quickly thrashed the ball with his boot and nestled it comfortably in the net as the ten-men had something to hold onto. 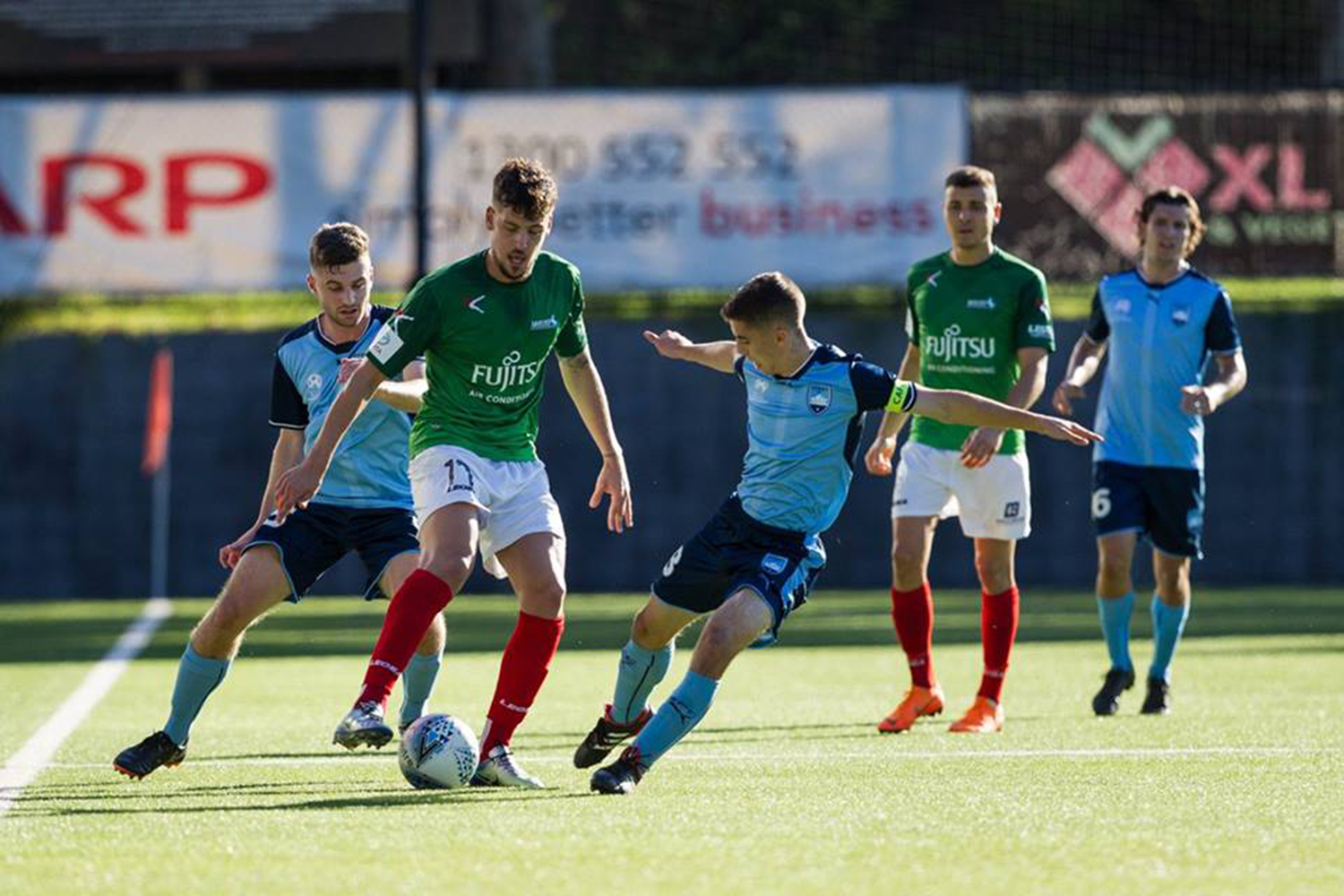 For Peter Tsekensis and his men, it looked like it was going to be a frustrating afternoon. Jesic had a direct free-kick fumbled then saved, as the coach urged his men forward against a tiring Sydney defence.

Sean Rooney had a running battle with the Sydney FC defence but the veteran striker had the last laugh. Rooney fired into the back of the net with a perfect curling free-kick to level things up at 2-2.

Braden Cheng was sent on, and the winger wreaked havoc on a tiring Sydney FC defence, but it seemed the polish wasn’t there for the Stallions tonight as they take a valuable point home with them.

“Character is a good choice of words for this performance. We scored with ten-men, battled hard against a physical Marconi. A special mention to Sean Rooney, dishing it out to the defenders who dealt with it well,” said Sydney FC Head Coach Robbie Stanton.

“I thought we matched their physicality. For me, it is all about their development.

“If we [Sydney FC] are the worst team, it must be an impressive league.”

Peter Tsekenis followed the same tact for his post-match and lamented some missed chances.

“We missed those chances and were always chasing the contest. The boys stayed patient and got the goal but definitely, could’ve made it easier on ourselves, so I’ll take the draw,” said Tsekensis.

“I’m not usually one for excuses but we have been plagued by injuries, so I’ll take the draw,”

“This current run allows us to get some bodies back, and set ourselves up for the second half the season.”

Sydney FC tightened their grip on third position with a comfortable 4-0 victory over Marconi Stallions at Lambert Park on Saturday afternoon.

Competition leading scorer Hamish Lamberton netted his 11th of the campaign for the Sky Blues while there were strikes for Finn Ballard-Mcbride, Jordan Swibel and Evan Tsakos as Sydney extended their unbeaten run to eight matches.

The win sets up an enticing second-versus-third encounter with Blacktown City in Seven Hills next Saturday with both sides entering the contest in excellent form.

Marconi have now lost four matches in a row and slip into bottom place on the competition ladder with Sydney Olympic and Manly United registering shock wins. Despite a number of positive signs for the Stallions through their start to the year it could be set to get worse for the league newcomers with the side set to welcome APIA Leichhardt Tigers and Sutherland Sharks to Marconi Stadium in the next week.