A double in each half helped the visitors to three competition points with Petar Markovic and Matt Sim finding the back of the net as well as Nick Olsen who scored a brace.

Sydney United 58 looked to settle on the ball in the early stages but were content to ease into the match. The visitors showed little urgency in the front third of the field when in possession.

The Sky Blues started brightly, however, in the tenth minute a poor clearance in a crowded box saw the ball drop to Peter Markovic whoic hit a dipping volley inside the left post to leave Thomas Heward-Belle scrambling in goal as United took an early lead.

The home side continued to push for an equaliser but struggled to keep the ball when they were in possession. United 58’s experience proved tough to crack as they kept Sydney FC from stringing together passes in attack.

United doubled their advantage just eight minutes after first going in front. Nick Olsen broke through the Sydney FC backline before beating the goalkeeper one-on-one with an accurate finish.

With a two goal lead in their hands, United closed out the half.

Sydney FC brought on striker Charles Lokolingoy shortly after the restart as they set out to put some offensive pressure on their visitors.

With the Sky Blues pushing numbers forward, United broke as Panny Nikas poked a pass through for Olsen who steamed into the box and hit his shot straight at Heward-Belle.

Sadly for FC the ball came back for an unmarked Matthew Sim to easily convert his side’s third goal of the night. 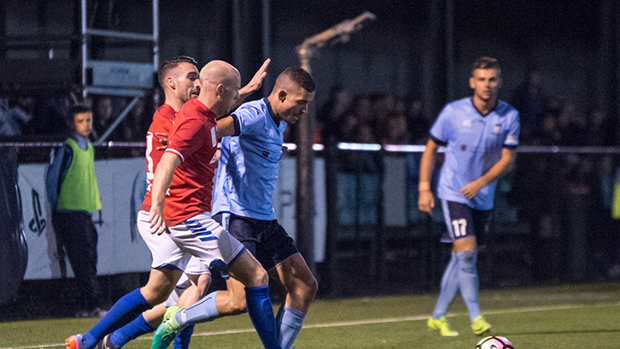 Despite their opponents’ dominance, Sydney FC had a number of opportunities to get themselves back into the match, and might’ve pulled one back when the ball fell to William Mutch at a tight angle in the six-yard box, but the goalkeeper saved well to hold onto his clean sheet.

With the minutes ticking down United rounded out the scoring as a cross floated in from the left was played back across the six-yard box for the arriving Nicholas Olsen to slam into an unguarded net.

Nicola Kuleski came close to putting his name on the scoresheet with a low, driven free kick in the last few minutes of the match however Thomas Manos turned the ball around the post to give away a corner.

Tensions threatened to flare after a late challenge saw players come running from all corners of the field but the referee chose to keep his red card with the result all but confirmed.

Sydney FC coach Rob Stanton said a lack of composure let his side down.

“We started really well, but we switched off for the two goals which was disappointing.

“We’ve got to make better decisions when we’ve got the ball, but it’s an experience.

“They’re brave in the way they play. We’re lacking a bit of killer instinct in the front third at the moment, but it’s there.”

“It was a good performance,” said Sydney United 58’s Jerry Bilokapic, standing in for Mark Rudan. “The boys worked hard for that result.

“Up 2-0 at halftime, we really talked about composure – we’ve got a young side but we’re a good side, we can cause problems against any defence so we’ve got to be composed when chances come our way. Composure and discipline, those are the most important things.”