In what was a high tempo encounter, a second half goal from evergreen striker Dylan Macallister proved to be the difference.

Scott Balderson gave the hosts a dream start when he fired home after just 2 minutes.

Latching on to a cross from Macallister, Balderson volleyed past Sky Blues shot stopper Thomas Heward-Belle.

On 10 minutes it was 2-0 and it was Balderson who again found the back of the net.

Picking up a loose ball after a corner, the attacking dynamo fired towards goal from 20 yards.

A hefty deflection helped his cause, but Balderson didn’t care after claiming the spoils.

Sydney FC rose to the challenge and pegged one back with 13 minutes on the clock.

Chris Zuvela’s missile from the edge of the area never looked like missing, with Manly custodian Dylan Mitchell rooted to the spot.

With 18 minutes gone Sydney’s Alusine Fofanah should have made it 2-2.

He picked his spot from the edge of the area but was unable to direct it goal wards, bending it over the crossbar. 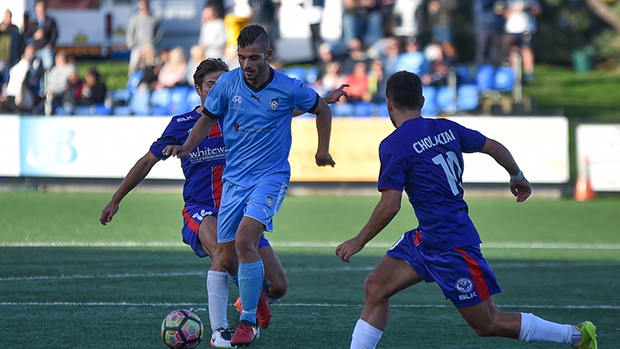 Ten minutes later Macallister almost made it 3-1 for United.

The striker shrugged off his would be marker and fired towards goal.

Heward-Belle leapt across and was relieved when Macallister’s effort bounced out to safety after crashing into the post.

Sky Blues coach Robbie Stanton no doubt delivered a rocket to his young side after the break as they were sharper early in the second half.

Cristian Gonzalez, who was introduced into the fray at oranges, didn’t take long to leave an impression on the pitch.

On 47 minutes he squared proceedings after volleying home a loose ball.

The scores didn’t remain level for long however, as United reclaimed the lead with 54 minutes played.

The off-season recruit found Macallister with a teasing ball, and the Avalon junior nodded home to restore United’s one goal lead. 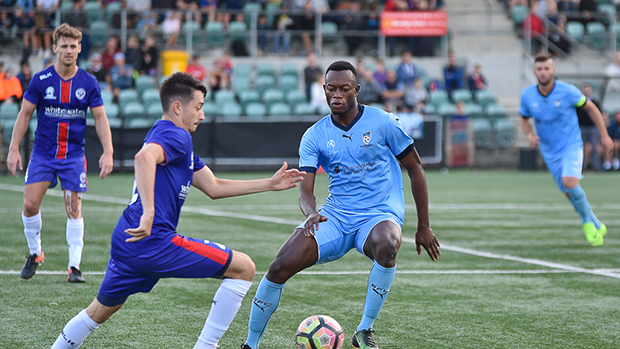 Replacement Bai Antoniou charged towards goal and produced a rocket which Mitchell brilliantly tipped wide of the goal.

The Sky Blues had a half chance in time added on to nab a point, but the home side held firm to seal the three points..

Sydney FC Head Coach Robbie Stanton said the match was another learning experience for his side.

“Three games in eight days took its toll,” he said.

“We didn’t handle the pressure at times, mentally we were not switched on and that was crucial.

“Manly are also a very good team, with plenty of experienced players.

“Our guys are developing, I am sure we will hold our own across the course of the year.”