Goals from Brayden Sorge and Aleksander Canak either side of halftime ended a run of three straight losses for the home side.

Sydney FC might have pulled a goal or two back after an improved second half performance, but Rockdale were able to hold their opponents out for a clean sheet and three crucial points.

Rockdale looked to stamp their authority early, and a chance fall to Steven Hesketh, who sliced his shot well over the crossbar. They went closer through Jordan Figon soon after, the striker leaping at the near post to flick a header onto the top of the crossbar and out for a goal kick.

Sydney FC went behind in the 24th minute to a goal from Sorge, who surged through a cluttered penalty area to head a bouncing ball across Mitchell Evans and inside the far post.

Rockdale pushed for a second goal immediately after, as Gaitatzis saw his shot saved well by Evans, while Alec Urosevski found himself clear in on goal before taking an awkward touch which dragged the ball out wide and spoiled the momentum of the attack.

Gaitatzis had a final opportunity to add to his side’s lead before the break when he was played in cleverly on the edge of the box by Urosevski, but he blazed his volley over the bar to leave Rockdale just a goal ahead at halftime.

Sydney FC looked a changed side in the second half, and Chris Zuvela might have pulled his side level ten minutes into the half when he picked up possession on the edge of the box and opened up an angle for a shot, but he could only slice the ball over the crossbar.

Immediately following the chance Rockdale doubled their as Canak carried the ball to the edge of the area before hitting a low shot inside Evans’ right post, giving the home side a two goal advantage with just over half an hour to play.

Sydney FC were buoyed by the arrival of Juan Zapata, who replaced the injured William Mutch on the hour mark, and immediately set about putting his mark on the match. Cristian Gonzalez sent a free kick flying over the bar before the Sky Blues hit the woodwork twice, Daniel Maskin and Chris Zuvela smashing shots against the post and crossbar within seconds of each other.

Jonathan Grozdanovski entered the fray late and had a chance to seal the win for Rockdale when he led a counter to find himself one-on-one with Mitchell Evans for 3-0, but the goalkeeper rushed out and made a solid block to deny the young striker the final say of the night.

Sydney FC’s Rob Stanton looked to draw on the positives after his side’s first defeat in a month.

“In the end, their experience showed – I’m happy there was grass on the pitch, but it’s a pretty bumpy pitch and we’re not used to that – they are, and they deserved to win,” he said.

“There were a few moments where we switched off and we paid the price – we were much better in the second half, but there were times when we made the wrong decisions and weren’t compact enough in defence. But it’s a learning curve, and I’m happy that we can come away from this with a few lessons for next week.” 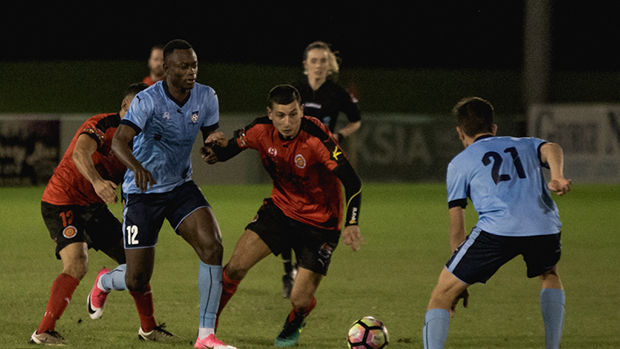