Sydney FC went down 2-0 to Sutherland Sharks in a hard fought contest at Lambert Park on Saturday night.

Sydney FC went down 2-0 to Sutherland Sharks in a hard fought contest at Lambert Park on Saturday night.

A goal either side of halftime enough to see the visitors through to a valuable three points.

Sydney FC began quickly; Jeremy Cox burst down the wing and cut a pass across the face of goal for Cameron Devlin arriving on the six yard box, but Ryan Norval was quick to pounce on the ball at the midfielder’s feet.

Rob Stanton’s men held their shape well in possession but were stretched when Sutherland ran into space, and were punished when Suyama picked up the ball on the right and drifted across two players before unleashing a low shot across the goalkeeper which skipped in at the far post.

To their credit, Sydney FC refused to be rocked by the goal and picked up where they had left off. Sam McIllhatton hung a cross in for Jeremy Cox to flick a heavy header over the bar, before the striker went close again minutes later with a header that slid wide of the post.

Jerry Skodatis should have levelled when he surged through the middle to find the goal opening up in front of him, but he hesitated at the edge of the box and curled a weak shot wide.

Sutherland appeared content to soak up the pressure while keeping their edge in attack: Adrian Vranic took the ball at the top of the box and spun to send his volley crashing against the woodwork and away, a reminded of the threat the visitors posed. A casual flick from Cameron Devlin that swung over the keeper’s head for a goal kick would be as close as the Young Sky Blues came. 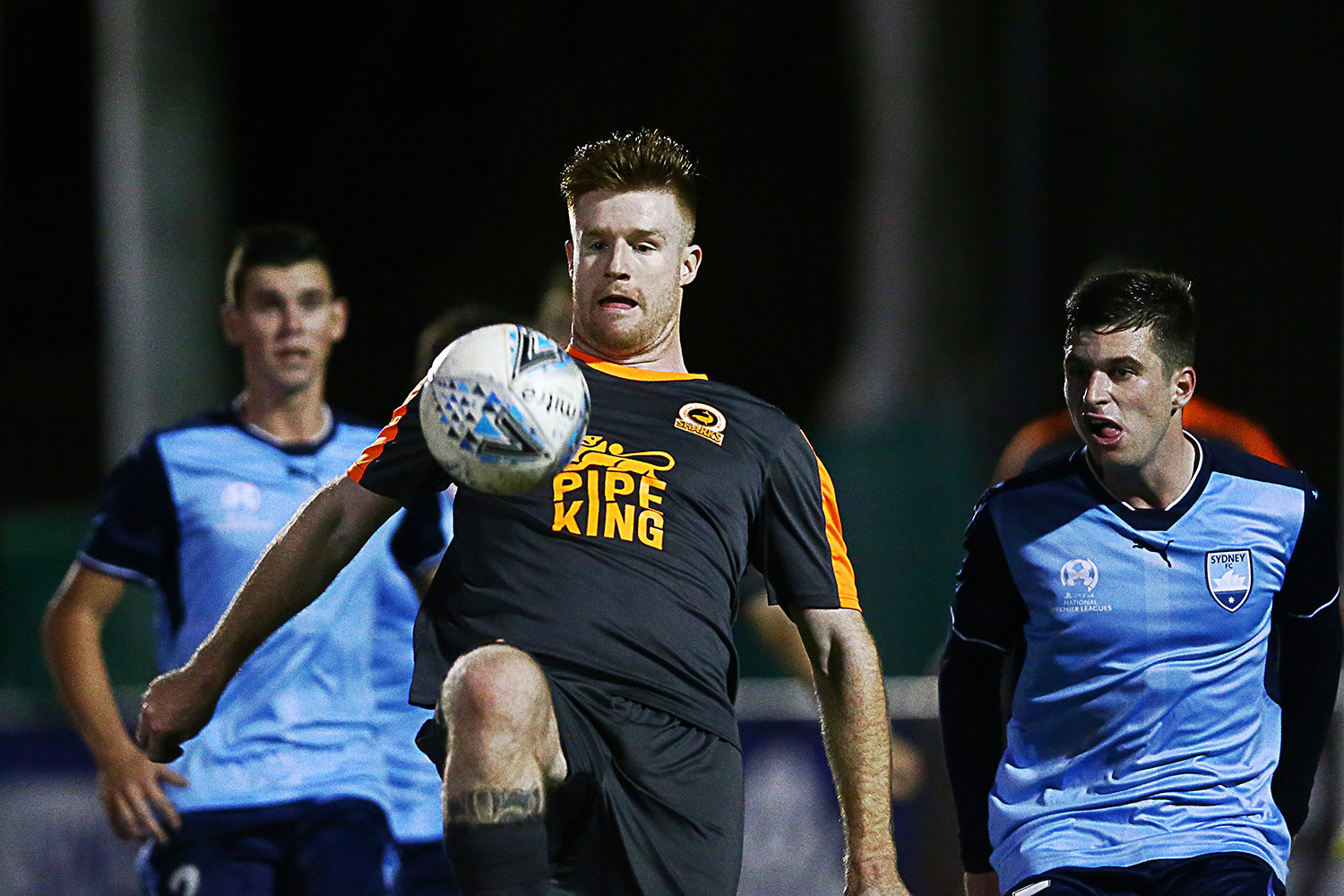 In a second half lacking all the fluidity of the first, it took nearly 15 minutes after the restart before either goalkeeper was tested.

A poor challenge from Patrick Flottmann upended Joshua Da Silva near the edge of the Sydney FC box, leaving Jacob Tratt to curl a free-kick just past the near post.

Luke Ivanovic and Jordan Swibel entered the fray to immediate impact, with Swibel unlucky not to reach a dangerous ball from Cox through the Sutherland penalty area. Ivanovic would have his chance a few minutes later when Sydney FC were awarded a free-kick in a promising position on the edge of the box, but he could only drill his shot into the trees behind the goal.

The hosts’ final chance for an equaliser fell to Skodatis, who collected the ball in a pocket of space on the left of the box and fired off a low shot which Norval gathered well.

In the final moments, and with Sydney FC stretched as they rolled forward, Leroy Jennings muscled his way through the backline and hit a clean shot under the advancing Duro Dragicevic to kill off any hope of an equaliser, and seal the game for Sutherland.

Sydney FC’s Robbie Stanton cut a frustrated figure throughout the match, but remained pleased with his team’s performance in spite of the result.

“It’s a game we should’ve won. We had the better chances in the first half. We lack conviction in the front third. We’re building our moments, but we lack the execution,” he said.

“I get frustrated, but we’re not being outplayed. We’re brave, and we know what we’re doing. We just need to cut out the silly errors which lead to goals like we saw tonight, but I can’t fault the boys too much to be honest. The performance was there.

Despite the win, Sutherland’s Grant Lee appeared relieved to just get through another game without losing a player to injury.

“We are what we are at the moment. We’ve had a couple of big injuries to key players which hurts us a little because we’re thin in numbers across the club, but today was good,” he said.

“We took our chances where we had to, we had some nice patches of possession play, but Sydney are far better at that. They’re training every day, they’re not kids any more, so it’s been nice to knock them over twice this year.” 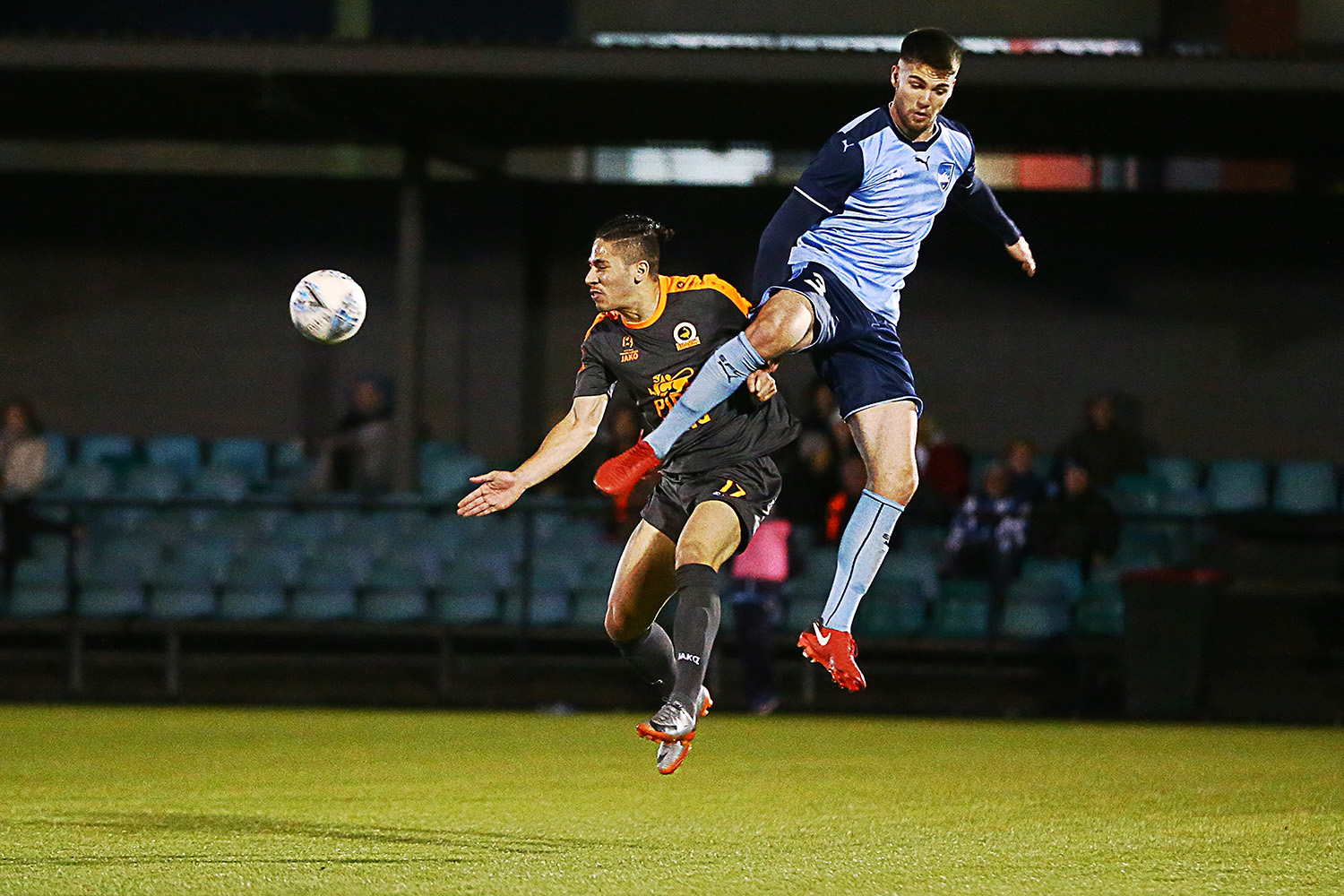 Marco Tilio delivered a performance to remember as Sydney FC defeated Sutherland Sharks 3-1 at Lambert Park on Saturday evening to return among the premiership contenders.

The Sky Blues midfielder clinched a superbly taken double and set up a goal for Hamish Lamberton as Giancarlo Italiano’s side ended an indifferent run of form with an invaluable victory over the runaway competition leaders.

Sydney had registered just one win in their last five fixtures prior to their date with Sutherland and entered the contest knowing a defeat to the first-placed Sharks would likely spell the end of their title ambitions.

But a determined, organized and committed 90 minutes from the Sky Blues, led by the mesmerizing brilliance of their pocket-sized playmaker, ensured that Sydney end the weekend firmly back in the premiership running.

Sydney are now five points away from the 2017 double-winners with nine fixtures remaining and will now turn their attention to another top of the table encounter with Wollongong Wolves next Saturday on the South Coast.

The Sky Blues will regard their triumph over Sutherland as a suitable template in which to take on the Wolves and indeed build on for the rest of their campaign. Having been crushed 6-1 by Nick Dimovski’s side in the reverse round two fixture at Seymour Shaw, Sydney knew a high-octane start was required and the home side had the visitors reeling after twenty minutes.

Tilio opened the scoring after racing onto a pass from brother Guiseppe before whipping a superb left footed effort back across Sutherland goalkeeper Nikolas Loe to hand the hosts a deserved lead.

And it got even better for the Sky Blues when Lamberton doubled the lead four minutes later. Tilio was this time the architect: holding off an array of challenges before clipping a perfectly weighted pass into Lamberton who grabbed his 13th of the campaign with a diving header.

Sutherland left the pitch at half time shell-shocked but responded well in the second half and crafted several opportunities to score. Sharks top scorer James Temelkovski saw the best chance arrive early in the second stanza but saw his stabbed effort on the penalty spot saved by Sydney goalkeeper David Malishev.

The visitors survived a few nervy moments of their own as Lamberton and Daniel Blachura went close for Sydney before pulling a goal back through Thomas Papa’s header after the midfielder timed a late run into the box to meet Adam Massoud’s deep cross from the right.

The Sky Blues playmaker received an incisive pass from Lamberton before applying an emphatic driven finish from the edge of the area to quell any hopes of a Sutherland fightback.

The defeat for the competition leaders follows a shock 2-1 defeat at home to Rockdale City Suns the previous Saturday, and while the Sharks have several sides starting to breathe down their necks coach Nick Dimovski said he isn’t overly concerned.

“I think it was a game of two halves,” he said.

“That first half Sydney were out of the blocks quickly and full credit to them. It’s a loss that we’re going to have to swallow and move on from.”

Dimovski’s Sharks have entered the second half of the league campaign with targets over their heads as the side aims to complete back to back premiership and championship doubles, but the Sutherland stalwart says there’s no shortage of quality in the title race and urged his players to regroup swiftly.

“I’ve got a lot of respect for the Wollongong team, I think they’re a good team that are only going to get stronger,” he said.

“Blacktown City and Sydney United 58 are both dark horses, and we’ve got an extremely hard game next week against Hakoah.

“We’ll be alright, we’re not going to push any alarm bells.”