Sydney FC were downed by a late winner as the Wollongong Wolves produced a spirited comeback at Lambert Park on a rain soaked Saturday evening.

Hassan Jalloh scored for the second week running to open the scoring for Sydney FC in the second half, only for Wolves to respond minutes later with a Ryan Elsom equaliser.

With shared points looming as a likely outcome, the ever reliable Peter Simonoski then came off the bench for the visitors to grab a late winning goal and spark wild celebrations for the boys from the South Coast.

The result made it two wins from three for Wolves who remain undefeated after a bright start to their 2018 National Premier Leagues NSW campaign.

The Young Sky Blues will learn from their second consecutive 2-1 defeat in a match from which they will take a number of positives after a highly energetic display in slippery conditions. 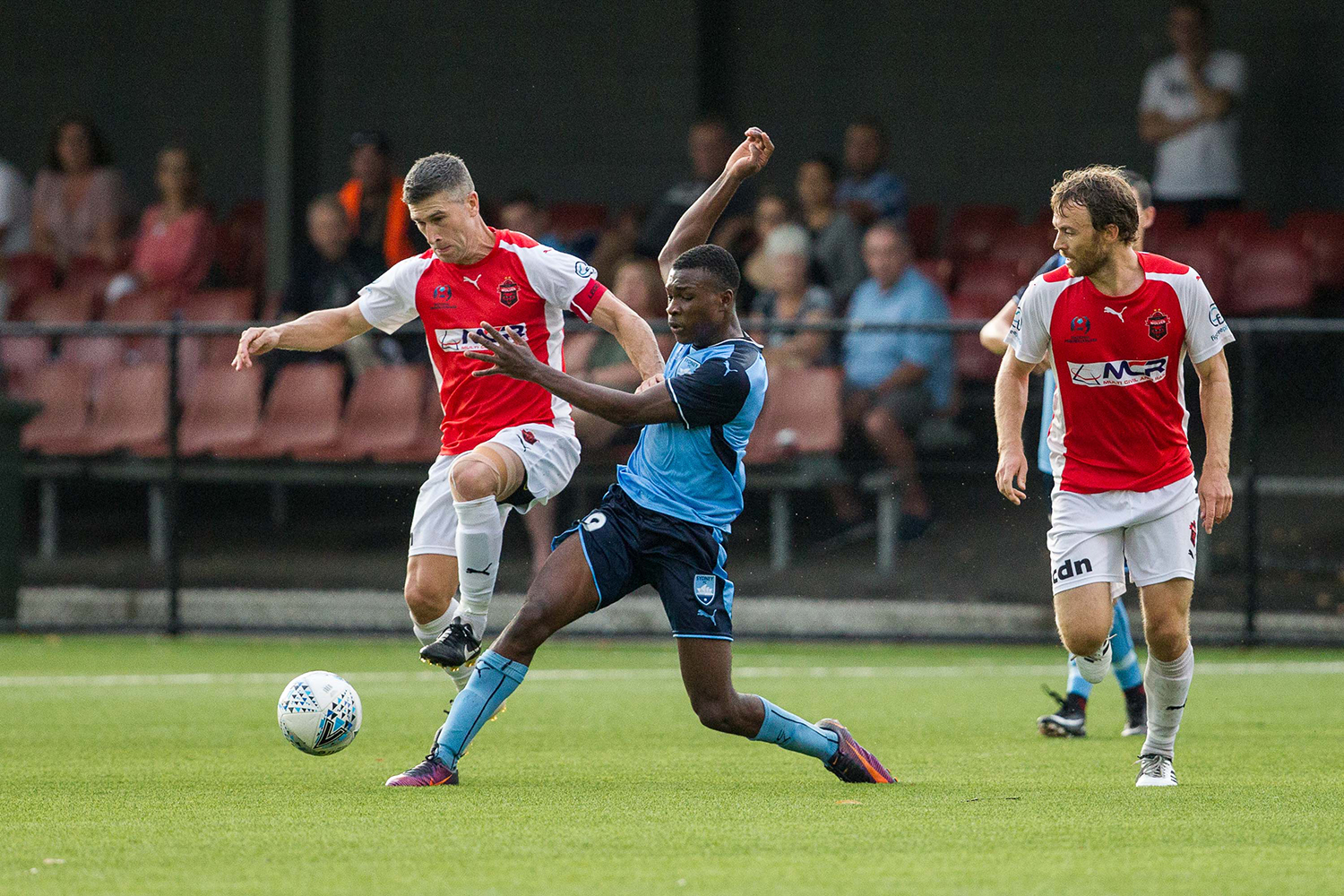 The hosts showed their intentions to intensely press the visitors from the outset, and the strategy almost paid immediate dividends as a heavy slip from Josh McDonald led to an opening for Jalloh; the nimble striker drew a reflex save from the in-form Justin Pasfield who looked keen to impress against his former employers from his first A-League stint some 13 years prior.

Wolves weathered the early storm with resolute defending and looked to create chances of their own with some excellent combination play on the counter. Former Kashima Antlers’ midfielder Takuya Nozawa was at the centre of everything for Wolves while McDonald recovered from his early tumble to look lively on the left.

Jerry Skotadis created the next chance for the hosts on the quarter hour mark with a splendid freekick. Fullback Brendan Curtis was on the end of it yet failed to find the connection needed under intense pressure from the onrushing Pasfield.

Sydney FC’s early dominance was without reward and momentum began to swing around half an hour into the match as Wolves found their foothold on the slippery pitch.

McDonald produced a driving run inside from the left flank, splitting William Mutch and Sam McIllhatton on his way into the box before toe-poking a shot straight into Duro Dragicevic’s safe hands.

Captain McIllhatton was calm and composed on the ball as he pulled the strings in midfield for the hosts. Time seemed to stand still when he found a half chance on the edge of the box; his driven shot pulled just wide of the far post with the keeper rooted to the spot.

Wolves went within inches of breaking the deadlock soon after when their Japanese duo produced a smart piece of play reminiscent of Quivui Fowler’s winning goal against Rockdale City Suns last Sunday.

Yuzo Tashiro collected and held a ball from Nozawa on the edge of the box before teeing up his Japanese counterpart for a shot that beat Dragicevic to find the inside of the far post and bounce clear. 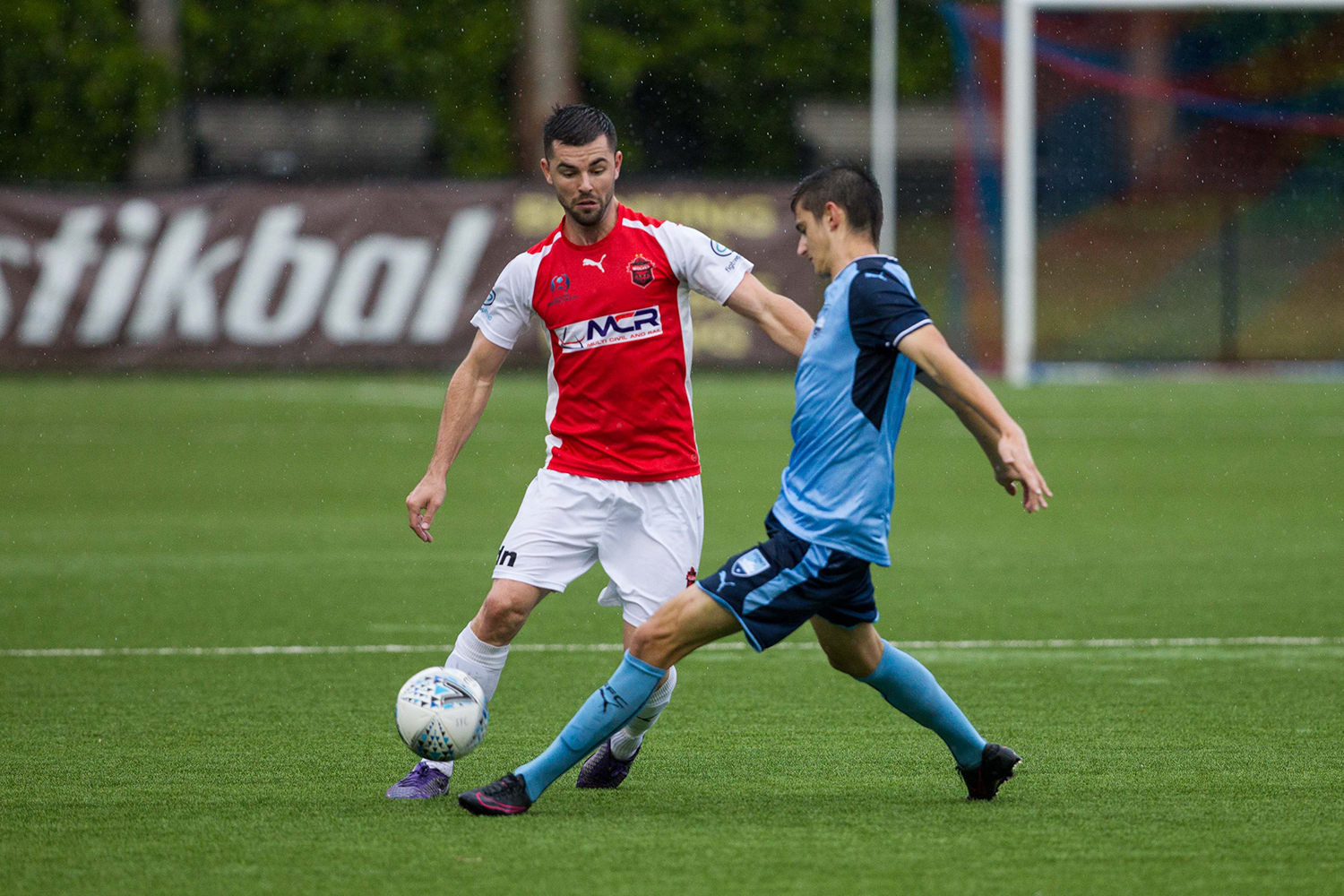 While the rain eased off for the second half the pitch remained incredibly slippery, making it challenging for the teams to create clearcut chances as the match grew into an intense midfield battle.

Chances were few and far between after the restart. Typically Nozawa threatened once again from the set piece and McDonald did so with a driving run for Wolves either side of Jeremy Cox going close to adding to his three goals for the season with a shot that deflected into the side netting.

The opener the match deserved duly came midway through the half when Jalloh picked up a smart reversed pass to dart into the box. The lively young striker beat Pasfield at his near post with a cheeky finish to send the Young Sky Blues and their supporters into delirium.

The lead was however short lived as Wolves earned an equaliser minutes later through Elsom with a driven shot from the edge of the box that was aided by a slight deflection to beat Dragicevic.

With both sets of legs tiring the match turned into a counterattack fest as the sides chased the three points.

The hosts’ saw a late penalty shout waved away while Nozawa threatened once again with a shot that curled wide of the far post.

The match was eventually decided late on by Simonoski; the supersub sprung off the bench to nab the late winner having spent under a minute on the pitch.

Wolves saw out the final minutes to take all three points back to Wollongong from their highly heralded young opponents.

Sydney FC coach Robbie Stanton was left disappointed with the result having watched his boys let their hard earned lead slip and come away without reward.

“It was just a standard performance to be honest,” said Stanton.

“It’s what we do every week, silly mistakes. They’re young and can recover from that, I’m just a bit disappointed with the few moments there where we are not learning our lessons.

“For most of it I thought we were probably the dominant team, a bit like last week, but in the end it’s about putting the ball in the net and winning. Probably that bit of experience was just too much for us.

“I thought in the first half we had good control of the game, we pushed them back and physically intimidated them at times.

It’s just the experience and mentality we need to grind it. We just have little lapses in concentration and learn things the hard way.”

Despite the result there were plenty of positives Stanton’s boys can take from the match.

“I’m very proud of them because they tried to play all the time, they were brave, they picked their moments,” remarked Stanton.

“We started the second half a little lackadaisical but then we got control and got the goal, but we then we just ran out of legs a little bit and football showed it can be a cruel game.

“Nevertheless I’m very proud of them. If you look at that football, that’s impressive football. I don’t think there’s many kids that age playing against men, and in one of the strongest competitions against J-League players and Monty (Nick Montgomery) who is an A-League player with great movement and positioning.

“It’s a good experience, but I’m disappointed because I think we can win every time, and that’s the problem.”

Wollongong Wolves coach Jacob Timpano was happy to claim all three points from a challenging match in terms of both opponents and conditions.

“It’s a tough place to come and team to play against,” said Timpano.

“The pitch today was a bit of an ice-skating ring so it was difficult for both teams. We’re not really accustomed to it so it took around half an hour to get into the match. Once we did in the back end of the first half and early second half we did dominate.

“We went a goal down which we probably shouldn’t have but the character of the boys to come back and win 2-1 tells the story tonight.”

Timpano also took time to praise Peter Simonoski for coming off the bench to seal the win for his side tonight.

“It’s difficult to not have him in the starting lineup but the boys are playing very well and he’s biding his time.

“He’s some weapon to bring off the bench. He’s come on today, done his job, and earned us the three points.”