A late Max Burgess goal helped Sydney Olympic to a 1-0 win all three pints against a plucky Sydney FC at Lambert Park on Saturday.

Burgess’ 85th minute strike provided the visitors with a hard-earned breakthrough and their third win from as many matches.

For Sydney FC it was another case of close but not close enough as Robbie Stanton’s side fell narrowly short of a maiden PlayStation®4 National Premier Leagues NSW Men’s win.

Both the Sky Blues and Olympic battled to assert their dominance on the contest from the opening whistle.

Yu Koboki had the first shot of the contest for Sydney Olympic but fired it right at the Sydney FC keeper.

Sydney FC proved they could handle the transition to the NSW state top flight as they created more than their fair share chances in the first half. Most of them came through striker Charles Lokolingoy who was once again at his most dangerous.

The match remained a scoreless stalemate at the end of the first stanza. 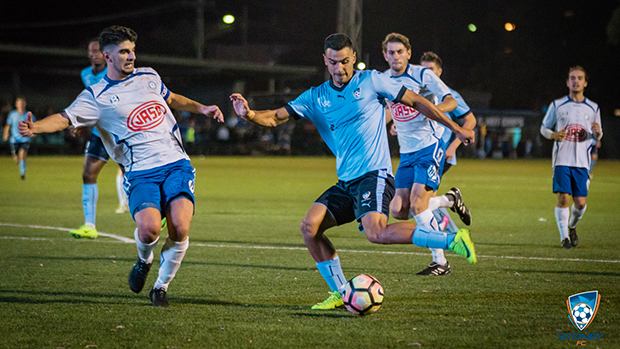 Sydney FC grew into the contest after half-time as they pushed forward to find an opener. Cristian Gonzalez went closest when he sliced a volley wide in the 50th minute.

Sydney Olympic FC almost had the opener in the 51st minute when Nikolas Tsattalios drove into the area. However, Sydney FC defender Brendan Curtis swept in to nullify the attack and keep the match scoreless.

The away side started to get on top as the half processed and Max Burgess went close once again. From a free-kick, Burgess curved a free-kick right at the Sydney custodian.

As the game continued to stretch, both teams had their chances to break the deadlock. Sydney FC sent on Alusine Fofanah and Juan Zapata in search of a goal and the latter was unlucky not to find the back of the net.

Finally, the breakthrough the game was searching for arrived.

Burgess surged into the penalty area before firing a shot past the Sydney FC custodian to give Olympic a 1-0 lead with only four minutes left to play.

Despite an edgy final few minutes, Olympic clung on to secure the win.

“It was a big effort and important for us to win,” he said.

“We had to move fast and find the pockets of space to create chances.

“Max (Burgess) worked very hard and showed tonight why he deserves his spot in the side.”

Sydney FC coach Robbie Stanton was pleased with his side despite the result.

“We are a young side and we’re only worried about performances. A win will come if we keep playing this way,” he said.

In the end, it comes down to the detail and if you get it wrong, you concede.”