Mutch’s second goal of the match broke the hearts of the travelling Wollongong fans as the streaky winger snuck in to help the Young Sky Blues secure a come from behind victory.

Patrick Antelmi’s 74th minute strike put the Wolves in prime position for a much needed away win before Mutch levelled the scores only moments later.

The former Blacktown Spartans player was then on hand to score the winner in the frantic final stages as Sydney FC secured its third win of the season.

Both sides were slow to start with neither comfortable on the ball. Sydney FC had the majority of possession but poor passing let them down.

It was an exhibition in conservative play, with neither side apparently able to complete an attacking move with a shot or, at least, a dangerous pass.

With half an hour gone, neither goalkeeper had been tested. Brendan Curtis whipped a cross into a crowded box, only for the ball to bounce past everyone and out of play for a throw.

Chris Zuvela had the first real chance of the match when he chased down Wollongong goalkeeper Justin Pasfield’s attempted clearance, but he watched his block rebound well wide of the goal.

Bai Antoniou tried his luck with a shot from the edge of the area as the break approached, but couldn’t keep the ball from flying over the crossbar to close out the first half 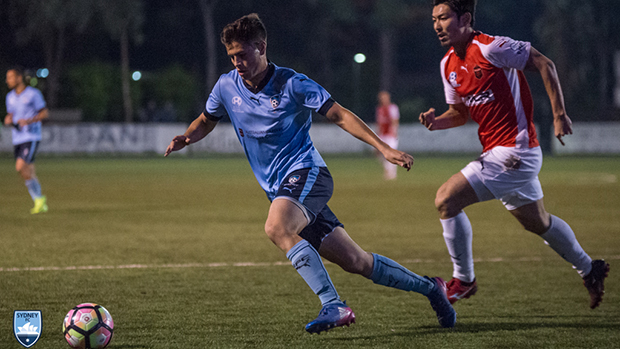 Wollongong’s Brett Wilson might have given the visitors a surprise lead when his cross clipped a defender at the near post to send the ball spinning towards goal. However, Mitchell Evans was across quickly to make a crucial save.

Antelmi nearly caught Evans out soon after when he curled a clever free kick to the open side of the goal. The goalkeeper was up to the challenge and made a key save.

Antelmi would go better only minutes later with an incredible acrobatic volley to open the scoring.

Sydney FC hit back immediately through Mutch. The winger directed a header back across goal from close range to level the score at 1-1 with just over 15 minutes to play.

A series of injury stoppages served to kill any momentum which had built up since halftime as the match slid towards a draw.

Sydney FC were not content with a point and up stepped Mutch in injury time.

Arriving at the back post, Mutch slammed home a cross from the left to snatch victory in the dying seconds.

Nick Montgomery very nearly put a further twist in the tale when he forced a vital save from Evans right on the final whistle.

Sydney FC’s Rob Stanton praised his strikers eye for goal in the win.

“We’ve been working on our execution, on finishing off our build up play, and you can see that we’re getting there with a result like that,” he said.

‘We deserved to win today, I thought we took the game to them and controlled it well. Even after going behind we maintained our composure and stuck to our plan.  I knew we could do better in the second half of the year, so I’m very happy and very proud of the boys.’

“I think a draw would’ve been a fair result,” he said.

“Sydney FC played very well and they’re a good side. They probably had the better of the first half.

“We weren’t helped by a few injuries which meant we had to really adjust the team in the second half. We did well to get the lead and we had a few chances there, but lapses in concentration cost us a couple of goals.”