Sydney FC’s Foxtel National Youth League side battled back from one goal down to seal a comprehensive 4-1 victory over FFA Centre of Excellence (COE) at Lambert Park, Leichhardt on Sunday.

A second half George Blackwood penalty, coupled with strikes to Bai Antoniou, William Mutch and Juan Zapta cancelled out COE’s first half opener to Muratovic to seal the three points in the first match of the 2016/17 season.

The Sky Blues were put under early pressure from COE with their high pressing game however it was Sydney FC who had the first sight at goal, as Charles Lokolingoy’s strike off Bai Antoniou’s cross was ruled out for offside.

Mitch Evans then produced a neat save to deny COE’s Moric before the away side opened the scoring as Muratovic slide the ball beneath Evans following a turnover in possession with 20 minutes played.

The goal sparked the Sky Blues into action and the home side rounded out the first half with unrelenting pressure as Lokolingoy, Woodcock and Antoniou all saw chances denied by the COE defence before the whistle.

The Sky Blues emerged for the second half re-invigorated and it was a 45 minutes of dominance as George Blackwood restored parity from the penalty spot three minutes after the re-start, converting from 12 yards after winning the initial spot kick. 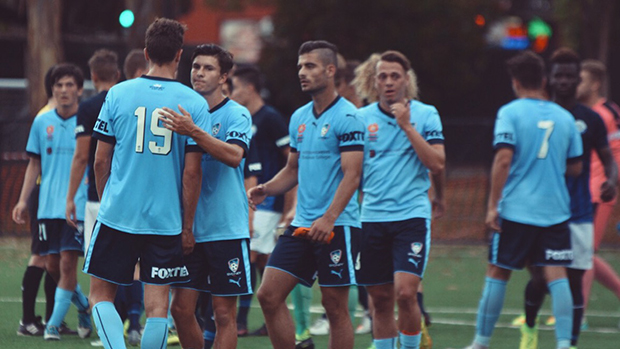 William Mutch was proving menacing with his insightful runs and he played a hand in the second goal as he released Lokolingoy down the right who squared for Antoniou to tap home 10 minutes later as Sydney FC took the ascendancy.

Lokolingoy missed a chance to increase the margin on the hour mark however 10 minutes later Mutch all but sealed the three points as he tapped past the keeper after being played clean through one on one with 70 minutes on the clock.

With time ticking down and a series of subs slowing the play, the Sky Blues increased the scoreline to 4-1 in the 80th minute as substitute Juan Zapata tapped home from point blank after Daniel Maskin’s effort rebounded off the woodwork.

There could have been more goals with a series of late chances to both sides gone begging, however the final whistle sounded to confirm victory for the Sky Blues in their opening match of the new season as they look to defend their 2015/16 title.

Sydney FC’s Foxtel National Youth League squad are next in action in the NYL Sydney Derby against the Wanderers at Marconi Stadium on Saturday 26 November (kick off 6pm).