Sydney FC defender Alex Wilkinson was the most relieved man at Allianz Stadium on Sunday as his Grand Final misery ended with a maiden Hyundai A-League championship.

Hailed by some as the signing of the season, Wilkinson was typically lion-hearted throughout the arm-wrestle with Melbourne Victory but looked set to continue his horror run in deciders when he put his shootout attempt wide of the upright.

It didn’t matter in the end as Carl Valeri’s miss and Danny Vukovic’s superb save handed the veteran his coveted first championship at the fourth attempt.

“I’ve been lucky enough to win premierships and other things overseas but I’ve never been able to win the championship.

“To tick that off is fantastic. And it’s just more for the boys after the year we’ve had.

“If we didn’t win tonight it still would have been a great year but it wouldn’t have had that icing on the cake.

“It’s just such a great feeling and I’m relieved to get that monkey off my back.”

Having reunited with Vukovic in Sky Blue this season, Wilkinson had his former Central Coast Mariners teammate to thank for swinging the shootout in Sydney’s favour. 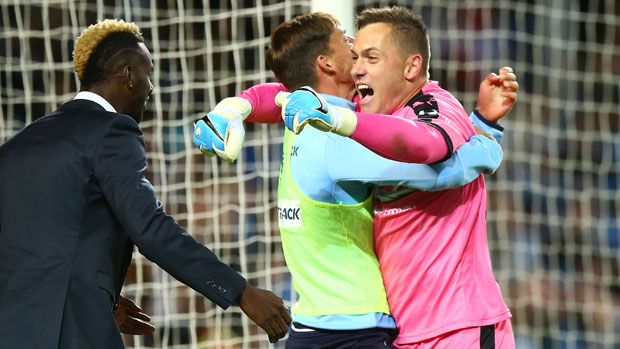 “He’s been first class all year,” the defender said.

“Penalty shootouts are made for the goalkeepers to stand up and he did that tonight.

“He kept us in the game and congratulations to him because he’s been absolutely brilliant.”