Wilkinson Geared Up For First Minutes

Sydney FC new boy Alex Wilkinson said he’s looking forward to getting his first minutes in his legs as the Sky Blues kick off their pre-season games on Wednesday night.

The Sky Blues take on the Earlwood Wanderers in the Johnny Warren Community Challenge at Leichhardt Oval (kick off 7:30pm), and Wilkinson is hoping to continue his integration into the Sydney FC set up and familiarise himself with his new team mates.

“Whether it’s a half or full game I’m not too sure [about my part] but the games all start this week and I’m sure there will be many more to come,” he said.

“As much as you train and do the fitness work on the training pitch match minutes are something you can’t really train for, you can only get match fitness by playing games so in that respect it’s very important.

“It’ll be nice to get back out there on Wednesday night. It’s just starting to get back into good habits and get a feel for your position.

“With me being new to the squad it’s also about just getting used to how everyone plays,” he continued.

“For me personally it’s going to be about learning what everyone is about and how they like to play.

“It’ll be good to get out at Leichhardt on Wednesday and hopefully there are a few Sydney FC fans there as well.”

With two weeks of pre-season training under his belt, Wilkinson believes he’s settled in well at the Sky Blues, and having completed a multitude of pre-seasons in the past, the Socceroos defender said his body is feeling well ahead of Wednesday’s match.

“It’s been a couple of weeks in pre-season, the first week was a bit more injury prevention based and making sure the body was ready to go for pre-season and last week they stepped it up a bit.

“The sessions got a bit harder and they’ll continue to do that over the next few weeks as we start to play games as well and get the match minutes up.

“It’s full steam ahead and I’m really enjoying my time.  Obviously I was familiar with a few of the coaching staff and the boys but everyone has been really welcoming and made me feel right at home.

“The A-League is pretty unique in that the pre-season is so long, you have three or four months to get yourself and the team ready so in that sense we’ve got a long time to go,” he continued.

“It’s about injury prevention at the start and then slowly building it up making sure you’re peaking at the start of the season. The body feels great and so far so good.” 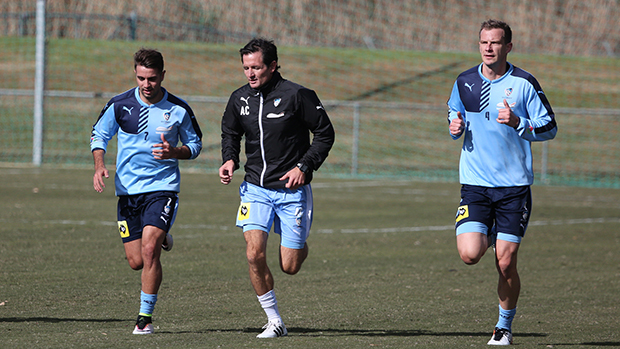 Sydney FC take on the Earlwood Wanderers in the second Johnny Warren Community Challenge at Leichhardt Oval on Wednesday 20 July (kick off 7:30pm). Get your tickets here and cheer your Sky Blues on in their first outing of season 2016/17.