Sydney FC’s A-League Women goalkeeper and Grand Final player of the match last season, Jada Whyman, has been called into the Matilda’s squad for Tuesday night’s clash against Brazil at CommBank Stadium.

It’s the second time the Sky Blues shot stopper has been selected for the full squad after being part of a European tour in 2018 when Australia faced England and France.

She will enter the party as an injury replacement for Teagan Micah who was injured in warm up on Saturday, and the 22-year old admits the call-up was perfect timing.

“I’m very excited to come into the squad, and I got the call on my birthday so it was a cool birthday present for me yesterday,” she said.

“It’s been cool to see a lot of the girls again and I want to make sure I can support the team as best as I can coming in at this point.” 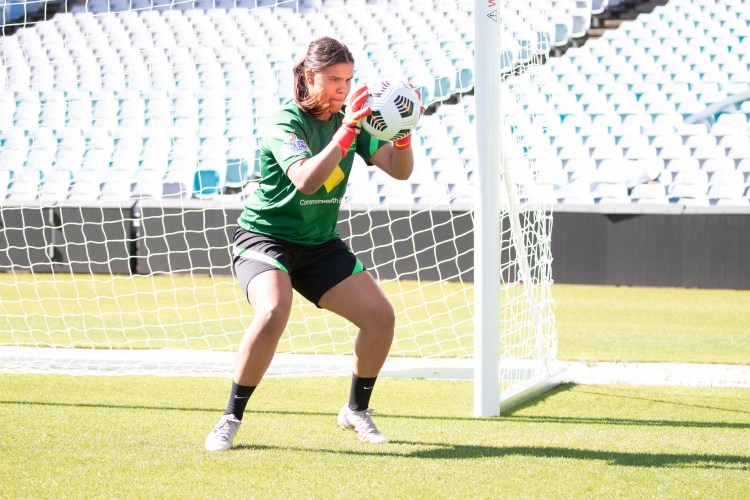 Whyman took part in Sunday evening’s training session with the group and will likely feature on the bench on Tuesday night.

“It was my first session training with a team group in three months, so I really enjoyed it,” she continued.

“I’ve been doing some individual work throughout that time, so it wasn’t too hard to get into the swing of things.

“The girls have been working hard and the standard was high which was good for me.

“I already had my head set for pre-season with Sydney FC which starts this week so this will definitely help with that too.

“It feels good to back to being around football and playing like this again.”

The young keeper has previously represented Australia at U20 and U17 level.

Kick off tomorrow night is at 8pm (AEDT) and is broadcast live and free on 10 Bold and simulcast on 10 Play.