‘Where Are They Now’ – Milos Dimitrijevic

In our ‘Where Are They Now’ series we’ll be taking a look back at some of our past players and hearing from them as they provide an update on what they’re up to these days.

Last week, we heard from former Sydney FC Player of the Year, midfielder Milos Dimitrijevic, as he hosted an exclusive Facebook Live chat on Friday night.

The Serbian joined the Sky Blues in January 2014, with his form coinciding with the Sky Blues run to the 2014 Finals Series, losing only four of their 12 games from January to April.

Season 2014/15 would prove Dimitrijevic’s standout year, as the Serbian proved an integral member of Head Coach Graham Arnold’s squad that reached the Grand Final, playing and starting all 28 games. 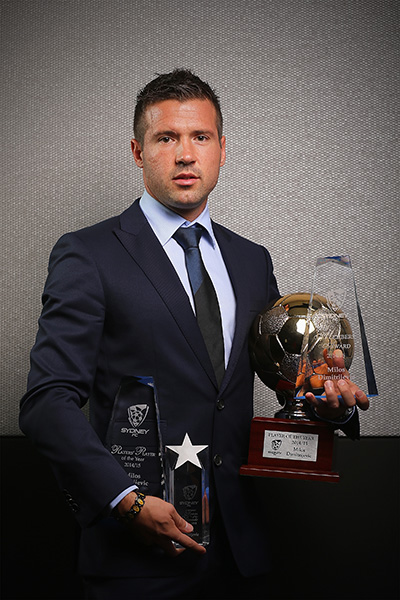 While Season 2015/16 was an up and down year for the club, Dimitrijevic again stood out and his performances in the AFC Champions League further underlined his credentials, with a 89th minute winner against Guangzhou Evergrade a goal that will live long in the club’s history.

In and out of the squad in Season 2016/17, Dimitrijevic made up part of a fearsome duo of Serbians alongside compatriot Milos Ninkovic, as the Sky Blues broke Australian football records to claim a stunning Premiership and Championship double.

Following Season 2016/17, Dimitrijevic and the club agreed to a mutual contract termination to allow the Serbian to move home to be closer to his family.

“I left Australia three years ago, and now I’m living between France and Serbia,” he said.

“I’m currently in Serbia with my family, taking care of my grandparents, but as soon as everything is finished [with the virus situation], I’ll be back in France working with my business again.

“I have a company in Paris, and I created a new medical device for rehab. We are selling the device to sports clubs and physiotherapies and it’s for everyone after an operation or injury to re-stimulate the muscle and regain muscle mass.”