The Sky Blues contested a Final at the same venue in 2015 and Arnold believes his players’ exposure to games of that magnitude compared to City’s lack thereof will play into his hands.

“The most important thing is ourselves tomorrow night, that we play to our gameplan,” Arnold said.

“We’ve been in this position only two [seasons] ago in a Grand Final with a lot of our players so we do know what it’s like to be in a big game, a Grand Final, and we look forward to the occasion.

It’s another game that we have to win and we will win,” he continued.

“We’re confident, it’s going to be a wonderful occasion and we prepare as normal for another game.

“We’ve got the most two expensive squads in the country. Melbourne City have come in leaps and bounds in the last few years but we can’t control anything that Melbourne City do.

“We have to worry about our own performance and what we do as a club. We’ve had that one day extra to freshen up but once you get into a big game all those things are removed. It’s a game we both want to win and we’re ready.” 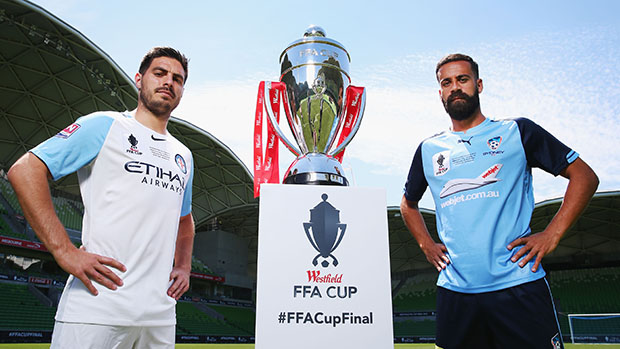 Arnold said the Sky Blues will only get better as the year progresses, following their undefeated start to the 2016/17 season, while Captain Alex Brosque credited the Sky Blues’ new acquisitions for getting them to this stage of the competition.

“Our performance against Brisbane was the best we played, we should have won that 8-1,” Arnold reflected.

“Against Adelaide it wasn’t our best performance but we controlled 75% of that game so it’s about getting better every game. Our form is very good and we’ll continue that into the game tomorrow night.

“I think [our form] has a lot to do with the players we brought in this year,” Brosque continued.

“The guys that we’ve added this year and the characters and personality they bring has just changed everything within the change room.

“Everything is set up well in terms of team spirit before we even go out and train. Guys like Wilko, his leadership has meant a lot and he’s the reason we’ve only conceded two goals this year, Josh and what he’s added with his work rate and Bobô coming in and strengthening the forward line.

Sydney FC take on Melbourne City in the Westfield FFA Cup 2016 Final at AAMI Park on Wednesday night (kick off 7:30pm). Catch the match live on Fox Sports or follow @SydneyFC on Twitter for updates.