We look back at the Westfield W-League 2015/16 season that was for the Sky Blues.

After facing Melbourne City in the first game of the season, it was a fitting end to face them in the final match as Sydney FC’s Westfield W-League campaign came full circle and closed on Sunday at AAMI Park.

From a 6-0 defeat on the opening day, to a 4-1 defeat that belied the Sky Blues performance in the Grand Final, the marked improvement of the Sky Blues over the course of the 12 games in the regular season and two finals series matches was evident.

Following a 3-0 defeat away to Canberra United in round two, the Sky Blues kick started their campaign with a well-earned 2-1 Sydney Derby victory, with Leena Khamis’ first half brace splitting the sides in the first televised match of the round for the Sydney FC at Pirtek Stadium. 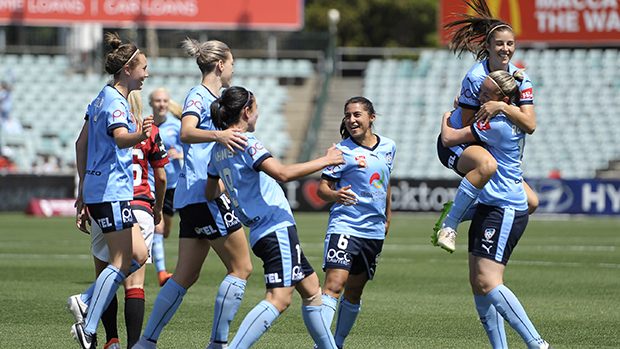 The Sky Blues next defeated reigning Premiers Perth Glory in an entertaining affair at Lambert Park, with Kyah Simon striking from the penalty spot in the first half  for the lone goal of the match.

“Perth Glory are a good side, they’ve got some good players and defensively I think we were immense today. I’m very proud of the girls and their effort. It was a team effort today, defensively for me I thought we were good, going forward we were brilliant.”

A last minute defeat to Canberra United at home followed before Jasmyne Spencer struck away against Adelaide United for an important three points on the road as the season passed the halfway point.

There was drama in round seven as the Sky Blues entertained the Wanderers at home in the second Sydney Derby of the season.

The Sky Blues played out a pulsating 2-2 draw against Western Sydney, with an Alanna Kennedy free kick the highlight of the goals, as Head Coach Dan Barrett raced from the field at final whistle after news of the impending birth of his baby girl reaching him ahead of kick off.

Sydney FC then consolidated their spot in the top three with one of the performances of the season as they comfortably dispatched Perth Glory at Ashfield Reserve, 4-2.

Kyah Simon bagged a brace, while Nicola Bolger and Jasmyne Spencer also contributed to the scoreline, with Simon saying post match that the game was reminiscent of the Sky Blues of old.

“It was the first week we actually played our old style of football,” Simon said.

“We were composed and patient and I was lucky enough to be on the end of a couple and hit the back of the net.” 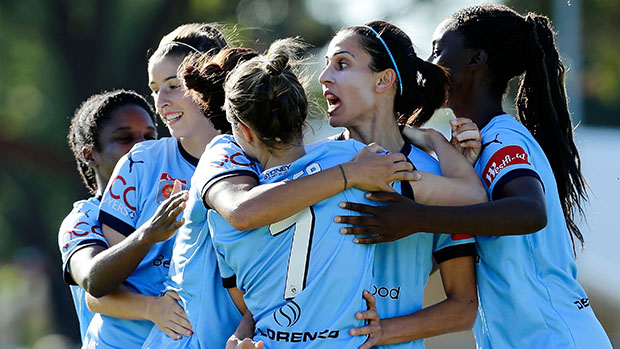 A spate of three televised games followed as Sydney FC graced Fox Sports and ABC at three of the country’s most iconic stadia.

A trip to Central Coast Stadium, palm trees and sauce bottles, saw the Sky Blues fall 3-0 to Brisbane Roar in the searing heat.

AAMI Park then beckoned as Sydney FC faced Melbourne Victory, with the season reaching the penultimate stages and finals football on the line.

Two goals in the opening half hour from Leena Khamis and Jasmyne Spencer had the Sky Blues in cruise control, before Victory threatened late with Sydney FC ultimately holding out for a vital win.

Victory was overshadowed however, with heartbreaking news that livewire midfielder and Westfield W-League 2014 Young Player of the Year Amy Harrison would be ruled out for the remainder of the season through a ruptured ACL.

The second largest stadium in the country next beckoned as Sydney FC faced Newcastle Jets at ANZ Stadium, with the Sky Blues putting in another dominant performance to comfortably dispatch the Jets and secure finals football for a record eighth consecutive season.

“The first step in the plan is to make the Finals and I think we deserve to be there.”

The regular season was rounded out away to Melbourne City, with Sydney FC pushing the Premiers for the entire 90 minutes, losing only to a last minute deflected strike before a Jasmyne Spencer strike just beyond the hour mark against Canberra United in the semi-final set up a Grand Final re-match. 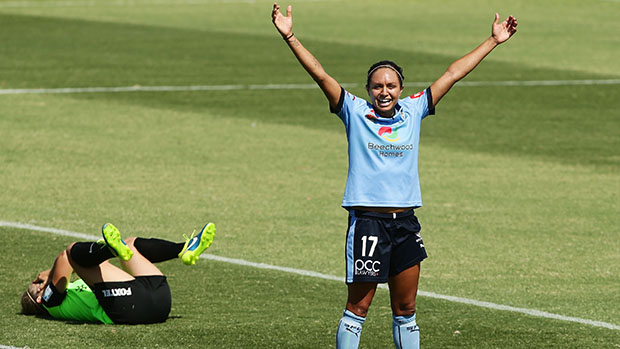 The Sky Blues were to finish Westfield W-League 2015/16 runners up however, as a valiant effort at AAMI Park was undone by two late counter attacks from Melbourne City to register a 4-1 score line.

“I think the 4-1 score line might have had a little bit to do with the way we threw players forward there at the end,” said Head Coach Dan Barrett.

“Melbourne City have been the best team all year and they were the best team on the day. The girls gave everything, we gave it a real go and we threw everything at Melbourne so there are no regrets.”