Freshly promoted to the top division this year, the Sky Blues pushed title contenders Rockdale City all the way in round one at Lambert Park, and Antoniou believes with the football on show the Sky Blues won’t be easy beats in 2017.

“It’s always disappointing not to get the win but some of the football we showed is definitely going to surprise a lot of teams out there,” Antoniou said.

“They know that we’re not here to be a laughing stock, we’re here to be the real deal of the competition.

“The quality of football was a bit better compared to NPL 2 and the shape and experience of the team was a lot better as well too,” he continued.

“It was good to be back playing against men, a faster pace and better quality football and it was a good start to the season as well.

“It always helps when you’ve got a squad that’s known each other for the last few years, the chemistry and togetherness, and it’s easy to play in a team when you’re all friends together.” 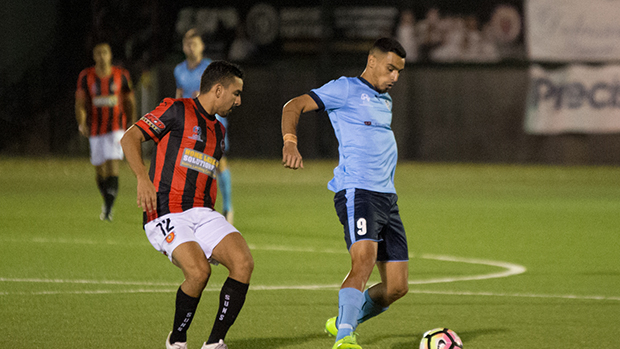 The Sky Blues received special praise from Rockdale player/manager and former Socceroo Paul Reid, and Antoniou said it was pleasing to receive plaudits from someone of his stature.

Facing Parramatta FC in round two, the Sky Blues come up against another Sydney FC employee in Community Football Officer Howard Fondyke, and Antoniou said he’s relishing the squad’s next encounter.

“It’s pleasing to receive that sort of praise from someone like Paul Reid,” Antoniou said.

“Reidy has been in the game a long time, he’s quite experienced as a coach and player so to get a positive comment from his is unbelievable.

“It’ll be another fun battle again playing against someone who’s associated with Sydney FC,” he continued.

“Howie [Howard Fondyke] knows us quite well so we’re looking forward to getting on the pitch against him.

“I think Parramatta will be quite a physical team.

“They’re not going to want to lose two in a row, especially to the young guys of the competition, so we’ll be ready as we are every weekend and we’re looking forward to it.”

Sydney FC take on Parramatta FC at Melita Stadium on Sunday 19 March (kick off 3pm). Follow @SydneyFC on Twitter for updates from our latest NPL clash.