Fresh back from international duties with the Socceroo’s, Sydney FC defender Rhyan Grant admits Saturday’s match against Melbourne City may just live up to the ‘fiery’ tensions we’ve come to know between the pair over their past few encounters.

Throughout the 2016-17 season, the clubs have seen their differences made apparent on the field, culminating more recently in round 21 when Melbourne City defender Manny Muscat was sent off late in the first half.

Saturday’s clash offers to be just as eventful, with Grant suggesting that there seems to be a developing rivalry brewing between the clubs.

“Every clash against them gets a little fiery. I think both teams thrive off that, so if that was too happen on the weekend then it wouldn’t surprise me,” he said.

“It creates a good atmosphere and a very tense sort of game, so it’s good for the neutral. I’m sure the weekend will be no different, but we’ll be ready for it.” 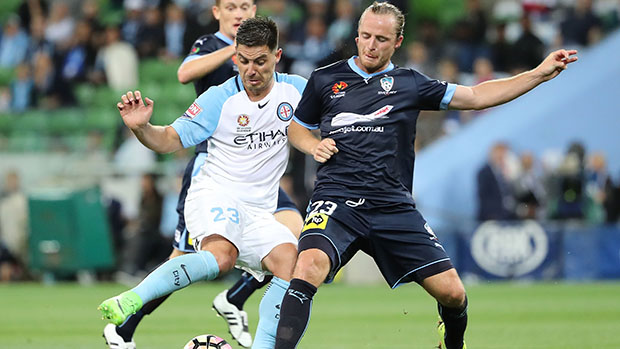 In terms of preparing for the game at hand, Grant said that his squad wont focus too much on the rivalry tag leading into the game, rather turning their attention to self-improvement and getting the all important win on the eve of the finals series.

“We don’t really look at the past too much, we just concentrate on improving on the previous game. We did really well against Perth, so the boys are eager to improve on that and obviously get the win on the weekend.

Back into the squad with a new found confidence from his Socceroo’s experience and a chance to smash the history books this Saturday, Grant said there is no lack of motivation going into this match, and that the boys are ready to fire on all cylinders, and take home the three points.

Don’t forgot to be there when your Sky Blues take on Melbourne City this Saturday at Allianz stadium 7:45pm AEDT.