We’re Out To Make A Statement – Arnold

Sydney FC Head Coach Graham Arnold said the Sky Blues are out to make a statement to Australia in tomorrow night’s Westfield FFA Cup Round of 16 clash against Bankstown Berries (kick off 7:30pm AEST).

Expecting to win at Sydney United Sports Centre on Tuesday, Arnold is anticipating the Sky Blues best football as he seeks a continuation of the squad’s recent form that’s seen them score 27 and concede only three goals in preseason so far.

“All we care about is performing to the best of our ability tomorrow night and to make a statement across the country of how good we are and I expect us to do that,” Arnold said.

“We’re preparing for tomorrow night like any other game, and that’s preparing to win.

“We expect to win tomorrow night, but for me it’s all based around attitude and performance.

“We have very high standards that are required with this team and squad, we have a great competition for places, we have a great squad this year, and we’re looking forward to getting out and playing again.

“I couldn’t be happier with the preseason and the way it’s going,” he continued.

“We’ve recruited well in the front half of the field, Adrian has fit in perfectly, Ninkovic is back and top fit, Carney is doing well as is Bobô, Matt Simon and Alex Brosque.

“We’ve got the numbers for quality but also to score goals, we’ve been working a lot on our final third combinations and with 27 goals scored in 5 games this preseason, that’s a good return.” 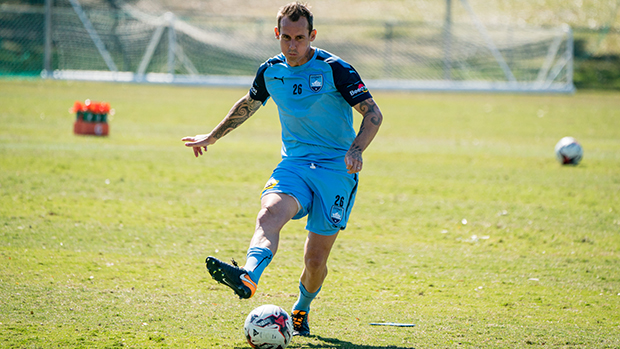 Arnold confirmed new acquisitions Adrian Mierzejewski and Luke Wilkshire would make their competitive debuts on Tuesday, as he said he was pleased to be playing on the artificial surface at Edensor Park at this time of the year.

“Both [Adrian and Wilkshire] will definitely play,” Arnold said.

“They’re here to play football and we want to get minutes into their legs for the fitness side of it but also to gel within the team and make sure they know their roles and responsibilities.

“Both bring a lot of experience and a hell of a lot of quality. Luke Wilkshire especially has fit in perfect, he’s doing exceptionally well.

“We’re delighted that the game is on at Sydney United on artificial grass,” he continued.

“The fields at the moment are very hard because it hasn’t rained for so long and they’re quite bumpy as well.

“To be able to go out and play on artificial turf where it’s going to be a true smooth bounce, the players will be able to really show their quality and we’re looking forward to it.”