Sydney FC marquee winger Filip Holosko has declared the Sky Blues as the best team in the country following their 11 match unbeaten start to the Hyundai A-League season.

Holosko said each team has to step up a gear when they face the Sky Blues as he expressed his belief in the Sky Blues to go the entire 2016/17 season undefeated.

“I believe we have the best team in the country,” Holosko said.

“[We have] the best coach, the best staff, they give us everything, we try our best on the pitch and I believe this season will be successful for us.

“We are motivated every game, when you win every game and don’t lose you are more confident.

“We work hard every training, we have a very good squad, everyone wants to play and this makes us better and better every week.

“I believe we can be undefeated all season. We are 11 games in, we have 16 games to go which is a long time but I believe we can go step by step every game,” he continued.

“Every team wants to beat us and maybe they put in 50% more when they play us compared to other teams because we are a strong team.” 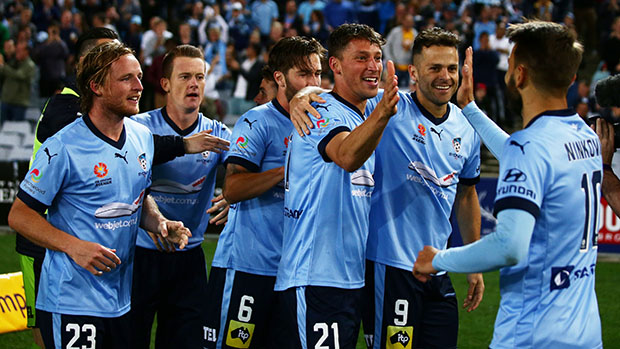 Holosko lauded the entire playing squad for their form to date, and handed special praise to goalkeeper Danny Vukovic and midfielder Milos Ninkovic, as he cast his eyes ahead to Monday’s Boxing Day clash away against Adelaide United.

“We’ve only conceded five goals and we have the best offence and defence,” he said.

“It’s not just goalkeeper, it’s the whole team, how we work in the front and back.

“I think he [Vukovic] is the best goalkeeper in this league. He shows that to everyone every game, he saves a lot of chances and when you have a good goalkeeper, maybe you have 10 or 15 points more for the team.

“Ninko is the best midfielder in the A-League and he has showed that this season. He’s scored five goals and I believe he could score more.

“They’re still a good team, they may be last but last year they were Champions so I think it’s a difficult game.

“I believe we will go there, we get three points and then after four days, not much time to recover, we are at home on 30 December [against Brisbane Roar].”

Sydney FC travel to face Adelaide United on Boxing Day at Coopers Stadium (kick off 7:50pm). Catch the match live on Fox Sports or follow @SydneyFC on Twitter for updates.