Steve Corica has always felt a target on his back throughout 14 years at Sydney FC, as both a player and coach.

And after winning the Hyundai A-League Championship in his first season as Sky Blues’ boss – the club’s fourth title – the 46-year-old believes the men from the Harbour City are more hunted than ever before.

“Everyone wants to beat you at Sydney FC,” Corica told www.a-league.com.au.

“When you’ve just won the Grand Final it’s even more so. We want to get better and win the Premiership this year, and to try and back up with another Grand Final win.

“We want to dominate games and win comfortably at times, we want to punish teams.” 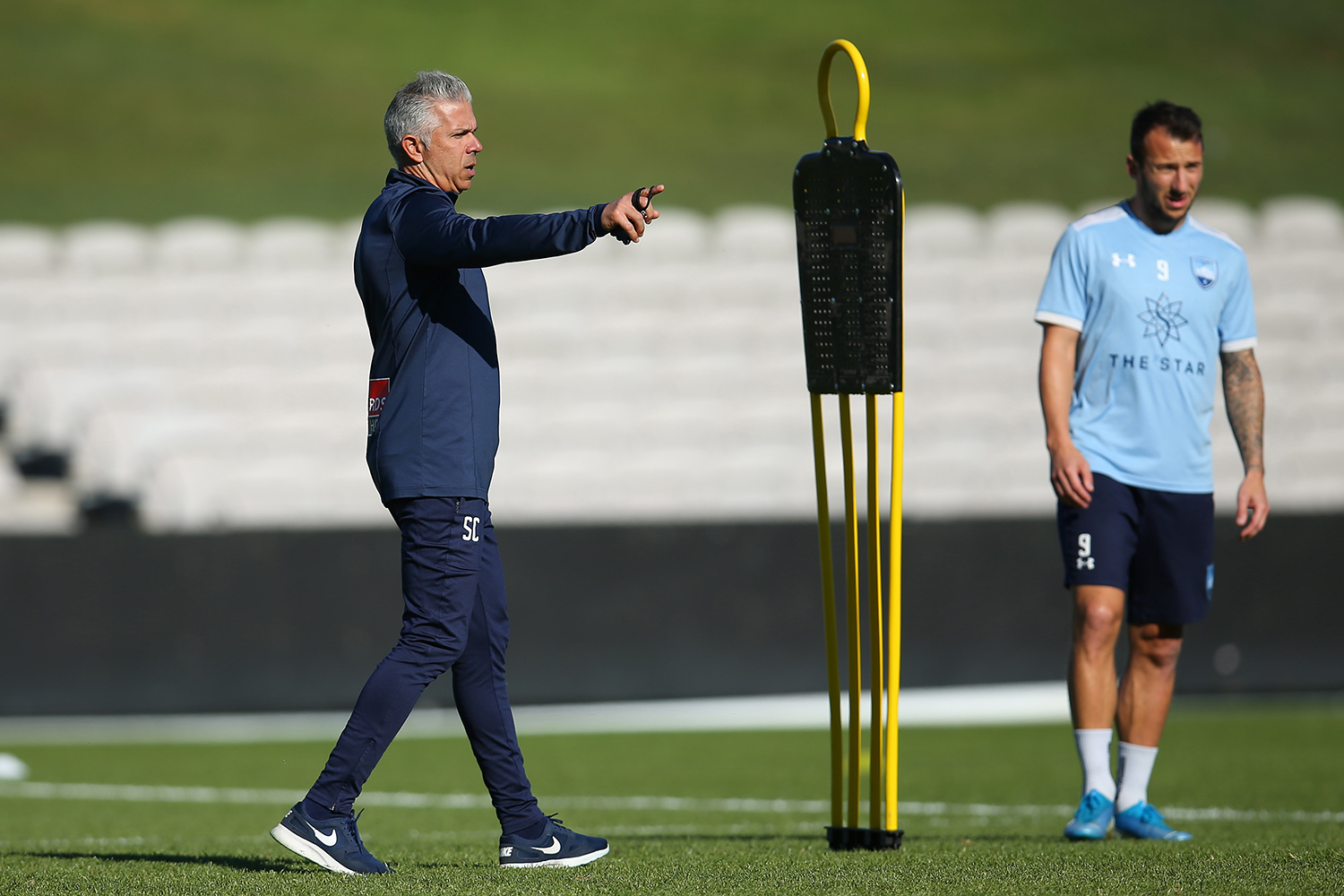 And following an exodus of star players like Adrian Mierzejewski and Bobô, coupled with the immense weight of expectation at the Sky Blues, it had no right to be.

But it was business as usual for the man from Innisfail affectionately known as ‘Bimbi’.

“It was a great experience, I enjoyed every minute of it from the start of pre-season,” Corica said.

“I think you gather everything together; the experience I had as a player, as an assistant coach and I’ve been Head Coach before of the youth team.

“It’s different when you do become the head coach, everyone relies on you to make decisions.

“The first season went really well with winning the Grand Final, it’s going to be touched this year again to try and back it up because not many teams have managed to do so.

“I think the message is: we won last year, but it’s going to be harder this year, they [the players] know that and they expect that, they’ve been Champions before, and they know how hard it is the year after.”

“Alex (Baumjohann) has been around the A-League for a year now and you know what you’re going to get from him,” Corica said.

“He’s a very technical and skilful player who creates opportunities for others and will score goals as well.

“Kosta (Barbarouses) has been around for a long time, everyone knows him; he has pace, good skills and he can score a lot of goals which he showed last year.

“They’re both very good guys that fit into the culture of the club, and they’re very good players.

“Ryan (McGowan) has been playing overseas for all his career, so he’s been great for the team not only on the field but off the field.

“He’s quite a funny guy which is great for the group as well.”

But with the impressive list of recruits there’s been one very noticeable departure in Alex Brosque.

In his retirement the Sky Blue talisman has left Sydney devoid of their captain and leader, but as time goes by Corica is discovering which players in his side are capable of making the step up to fill Brosque’s shoes.

“We miss him, but we need to move on,” Corica said.

“He brought a lot to the club but that’s football, it’s always changing and players are leaving or in his case retiring which was the right decision by him.

“He wanted to go out on a winning note which was great that we could do that for him last year, but the experienced players need to step up and they do have the experience to step up.

“Alex Wilkinson has taken over as captain; he’s captained clubs before and he was captain when Brosquey wasn’t playing so it’s nothing different for him.

“He’s a great leader in himself, they lead different of course as Brosquey was up front leading the charge and now Wilko is at the back doing the same thing.”

With his captain selected and his new recruits bedded into the squad Corica has been satisfied with the progression made by his side in pre-season and is now eagerly anticipating the resumption of A-League action, starting with the season opener against Adelaide United on October 11.

It’s now been four months since that remarkable Grand Final win over Perth Glory etched Corica’s first season as Sydney FC Head Coach into the history books, but as the 2019/20 campaign approaches the Sydney FC boss says looking forward, not backward is the main prerogative for his side as they gear up for a brutal Championship defence.

“It’s been a long pre-season and everyone is ready to start,” Corica said.

“I think this season with the new team coming in there’s another derby game for the Melbourne teams which is great, you get to see the new players and coaches coming into the league which is always good and the new foreigners to see what they’re about.

“It think a lot of the teams have strengthened and will play differently with the new coaches coming in.

“It’s going to be an exciting year but it’s difficult to say until we start the A-League, which everyone is very excited about.

“The message to our boys is to go back-to-back this year; that’s what the plan is.”