We Can Make History – Brosque

Sydney FC Captain Alex Brosque can see no reason why the Sky Blues can’t create history as the most successful club ever following their Premiership win at the weekend.

Chasing a record points haul of 65, set by Brisbane in a 30 game, 11-team league, Brosque said the Sky Blues can win every match left in their path as they seek Hyundai A-League history.

“Every game is winnable with the way we’re playing at the moment,” Brosque said.

“We definitely think we can break that record as well. If we go back probably four or five weeks ago, that target of 65 seemed a hard target.

“I sort of, not doubted, but thought if we could break the 57 that would be fantastic. To be in a position to go for the 65 is great. Two wins and a draw will get it done.

“You look at the schedule and think, ‘right, we’ve got a few hard games coming up’, but we just keep winning and playing well. Not that it surprises me, but it is a nice feeling.” 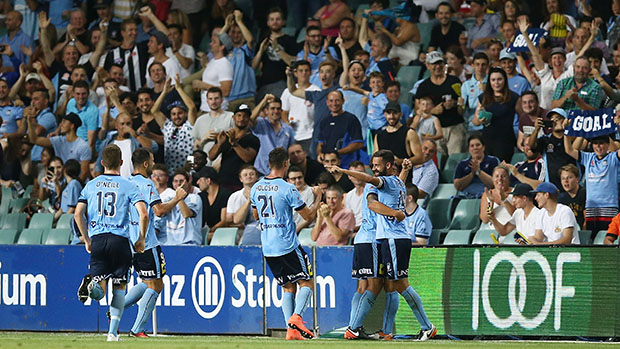 Brosque revealed the mentality Head Coach Graham Arnold had instilled in the squad following their securing of the Premiers Plate, as the Sky Blues Captain said the aim was to take maximum points from the last three rounds.

“He [Arnold] spoke about being not just a good team, but a great team,” Brosque said.

“He went through and asked everyone if anyone has ever been a part of a really great team, one that’s gone down in history as having done something great and no one could put their hand up.

“It was eye-opening to realise that even at my age, and at best I’ve got a couple of years left, I’ve never been a part of a team like this. It’s not often that it comes around.

“It really sunk in that we’re in a good position to do something special. We’re aiming to win the last three games and just keep rolling.”

Make sure you’re at Allianz Stadium this Saturday to see your Hyundai A-League Premiers in action against Melbourne City (kick off 7:50pm AEDT). Get tickets now and be there to back your history making Sky Blues.