The Sky Blues first ever regional partnership with Football Wagga Wagga started only six months ago, however a lot has been achieved in this short time, with plenty more on the agenda!

Upcoming events within Wagga Wagga and at Sydney FC home games in April will further cement a flourishing first year of partnership, with holiday clinics set to return to Wagga Wagga at easter time, and a group of juniors due to travel east for Sydney FC’s last home game of the season.

Sydney FC will also play host to various FWW juniors who will attend Sydney FC’s last home game of the year to take part in an official match day experience against Newcastle on Saturday, 15 April. Following this, the week afterwards Sydney FC will be on the road to visit Wagga locals with the holiday clinic set to run from 19th April. With over 100 boys and girls from Wagga Wagga and near regional centres being involved in the Sydney FC Holiday Clinic in October last year, it’s hoped there will be a number of familiar faces returning in the upcoming Autumn school holiday period.

“The main focus of our community partnership is to provide these footballers with memorable experiences and opportunities that they would not otherwise be exposed to “. said Community Manager Paul Reid.

“I am also looking forward to welcoming over 70 players from FWW who will take part in the match day activities for our last home game of the regular season.

“FWW will be providing the players to be ball kids, play in the small sided games and carry out the Hyundai mat at half time, as well as walk out with the A-League players prior to kick-off.

“It is always a special experience for the girls and boys and something that they will remember for a long time.”

The April plans continues a fairly active six months with Sydney FC being able to increase their presence in local primary schools throughout the Riverina area as a result of the partnership, seeing over 500 students in 4-6 week participation programs.

Additionally, four of the young aspiring male juniors who play for the Wagga City Wanderers attended a training camp with the Sydney FC Academy teams in January and whilst they were in Sydney, it was organised for these players and their families to attend their first ever Sydney Derby at Allianz Stadium.

“When I heard from the four players and parents that trained with the Academy teams about how much they learnt and have become a better footballer, it is very rewarding for Sydney FC. Offering a potential pathway for players in regional areas such as Wagga Wagga to further develop as footballers is definitely one of the benefits of this partnership”, said Reid.

Opportunities were available to aspiring female players over January as well with about 40 players from the Wagga City Wanderers Academy teams watching the Sydney FC W-League team play at Lambert Park, finishing off with an exclusive meet and greet on the pitch with the W-League players after the game. 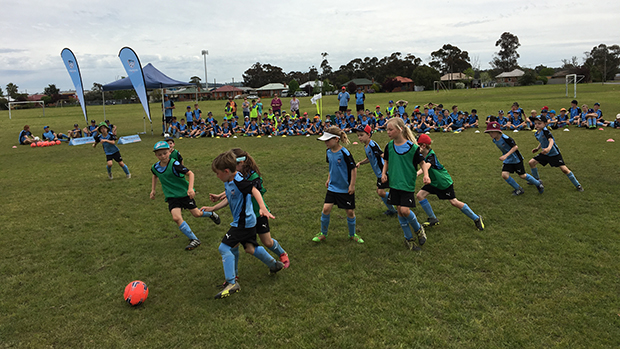 Details of the Holiday Clinic in Wagga Wagga as well as all of the Sydney FC clinics in the upcoming school holiday period that are now on sale can be found at www.sydneyfc.com/community