Sydney FC were inches away from kicking off their Hyundai A-League campaign with a win, after a Terry Antonis thunderbolt from 25 yards crashed off the bar in the final seconds of the Sky Blues 1-1 draw with Melbourne City at Allianz Stadium.

A crowd of 25,525 saw a stunning strike from Sydney FC forward Corey Gameiro cancelled out by a first Hyundai A-League goal from Spanish World Cup winner David Villa in the second half.

They Sky Blues were without six players who were away on international duty as Graham Arnold gave chances to Foxtel National Youth League youngsters George Blackwood, Max Burgess and Alex Gersbach.

Graham Arnold:  “I was very proud of the boys with the numbers down that we had. I thought first half we were a little bit nervous but second half we came into it much better.  We moved the ball much better and at the end if Antonis’ shot doesn’t hit the cross bar then we could have won the game.

“When you’re playing against the richest club in the country and against a superstar like that with the numbers we were down then yes I’d take 1-1 at the start of the game. It took a world class player to deny us all three points.” 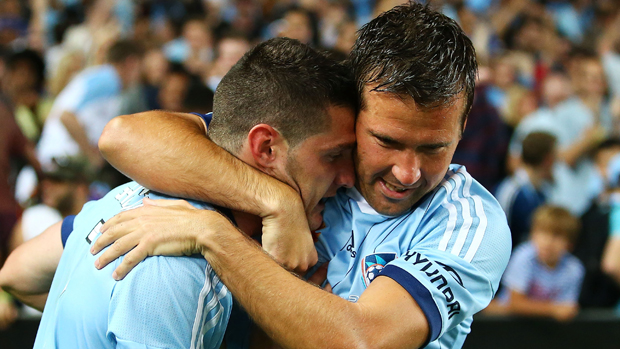 Sebastian Ryall: “I think there were some encouraging signs for us.  It’s the coach’s first match in charge and we are a work in progress.  We’ll keep moving forward and take the positives out of tonight.

“Corey deserved a goal and has had a really good pre-season. He has worked his socks off to get into the starting line-up.  It was a good goal and hopefully there will be more from him.

“Wanderers is going to be an exciting match next Saturday and of course we are keen to beat them.”

54’ GAMEIRO GOAL – Nick Carle and Alex Brosque combined to win the ball back in the heart of the pitch and Carle drove into the Melbourne City half.  The Sky Blues midfielder nudged the ball out wide left to Gameiro who did well to stay on side and he struck a brilliant first time, right footed shot beyond Redmayne and into the keeper’s top left hand corner.

62’ VILLA GOAL– Duff received the ball from Murdocca on the Melbourne City right.  He crossed to the left edge of the Sydney FC penalty box where Villa picked up the ball, beat Ryall and slotted a right foot shot beyond Janjetovic.

4’ BROWN HITS THE BAR – Mooy beat the offside trap to get clear down the Melbourne City right hand side.  He moved into the right hand side of the penalty box where he pulled the ball back to James Brown just outside the box. Brown took aim and crashed the ball off the crossbar and out.

19’ DUNGANDZIC CHANCE MISSED – Ognenovski mis-judged a clearance and took a swing at fresh air allowing Mate Dugandzic to run clear on goal.  The Melbourne City striker pushed his shot well wide of the post as Janjetovic narrowed the angle.

21’ JANJETOVIC DIVING SAVE – Janjetovic dives to his left to punch clear a shot from Dungandzic from 25 yards.

32’ CARLE SHOOTS OVER – Great work from Brosque on the Sydney FC left hand side to get to the byline and pull the ball back to Carle who put a left foot shot high over the bar from just inside the box.

64’ ANTONIS SHOT – Antonis won the ball inside the City half and moved towards goal. His shot from 20 yards was parried by Redmayne but the keeper picked up the loose ball before Gameiro could pounce.

89’ ANTONIS HITS THE BAR – A high ball forward dropped to Terry Antonis around 25 yards out and the midfielder hit a first time shot on the volley towards goal which crashed off the bar. Max Burgess picked up the loose ball but fired wide.

For Melbourne City star forward David Villa began the game on the bench.