Sydney FC have finished as the Westfield W-League 2015/16 runners up after falling to Melbourne City in a valiant display in the Grand Final at AAMI Park on Sunday.

Sydney FC have finished as the Westfield W-League 2015/16 runners up after falling to Melbourne City in a valiant display in the Grand Final at AAMI Park on Sunday.

The Sky Blues entered the match as underdogs but pushed City all the way, with two late goals on the counter attack putting the gloss on a score line that wasn’t reflective of the Sky Blues performance.

Sydney FC’s Westfield Matildas contingent will continue to play on with the Olympic Qualifiers drawing closer, as Sunday marked the end of another positive Westfield W-League season for the Sky Blues, with Sydney FC setting a new record for consecutive finals appearances while finishing third in the regular season. 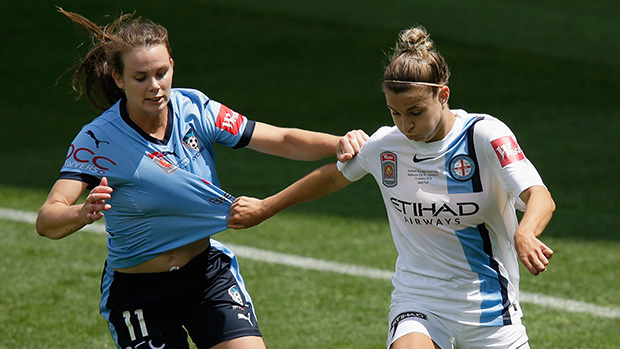 Head Coach Dan Barrett: “I think the 4-1 score line might have had a little bit to do with the way we threw players forward there at the end, but Melbourne City have been the best team all year and they were the best team today. The girls gave everything, we gave it a real go, we threw everything at Melbourne so there are no regrets, but we’re still disappointed that we didn’t get the win today.

“I thought we had a sniff right at the start, I thought we started well and we had a good chance early which we couldn’t convert. I thought we were always in the game but it was difficult when they went one up. When they scored first it was always going to be difficult.” 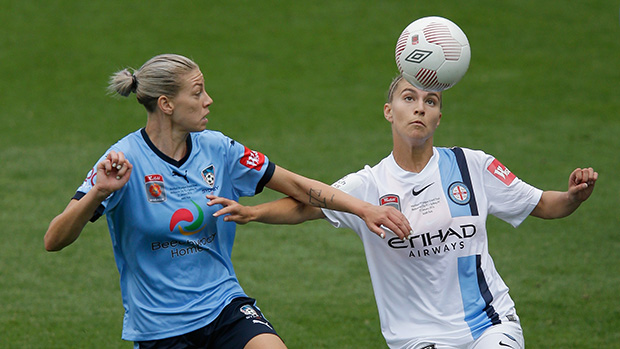 32’ BEATTIE GOAL – Jennifer Beattie prodded home from point blank range after her initial effort was parried into the post by Betos in goal.

55’ LITTLE GOAL – Kim Little doubled City’s lead with a well taken free kick into the top left corner that Michelle Betos could do nothing to stop.

69’ SIMON PENALTY – Kyah Simon reduced the deficit with a calm finish from the penalty spot after Alanna Kennedy was fouled contesting a corner to win the spot kick.

90+5’ DE VANNA GOAL – City break and De Vanna charges in one on one with Betos before dispatching the ball low into the net.

15’ SIMON SHOT – The Sky Blues worked the ball around the City penalty area before crossing low to Simon whose shot went wide with the defenders closing in.

22’ ALLEWAY HEADER – Laura Alleway heads over the bar after being picked out by Little’s cross towards the far post.

41’ GOAD SHOT – Beatrice Goad breaks the Sky Blues line to go one on one with Betos however the Sky Blues keeper is up to the challenge as she reaches low to save.

60’ SPENCER SHOT – Leena Khamis breaks into the box before being dispossessed, however Jasmyne Spencer is first to the second ball as she blazes an effort high over the bar.

66’ SPENCER SHOT – Jasmyne Spencer takes on her marker before breaking into the area, however her effort from an acute angle flies over the bar.

75’ DAVEY SAVE – A deep cross from Alanna Kennedy looks destined for the top corner, however Davey leaps back to tip the ball over the bar.

86’ BETOS SAVE – Lisa De Vanna breaks forward on the counter before squaring to Fishlock in the six yard box, however Betos is quick to react and dive low to smother the shot.

Sydney FC Head Coach Dan Barrett named an unchanged starting lineup for the second week in a row, for the Westfield W-League Grand Final. Hannah Bacon came onto the bench as the only addition in an otherwise un-altered set up from the side that defeated Canberra United in the semi-final.