Premiers Sutherland Sharks face their biggest test of the campaign when they take on a rejuvenated Sydney FC in Saturday’s major semi-final at Lily’s Football Centre.

A place in the Grand Final goes on the line when the two teams clash on Saturday with the winner sure to enter September’s big day as title favourites.

Sutherland finished the year with the best offensive and defensive records and entered the finals series with six wins in a row to earn a week’s rest but will need to recover peak intensity against the Sky Blues given their formidable win over APIA Leichhardt last weekend.

With leading scorer John Iredale and midfielder maestro Samuel Mcillhatton both making goalscoring returns from the Sydney first grade team against the Tigers in finals week one, the Sky Blues look to have returned to their best and will go into the encounter with a significant amount of confidence having kept a normally free-scoring APIA side at bay. 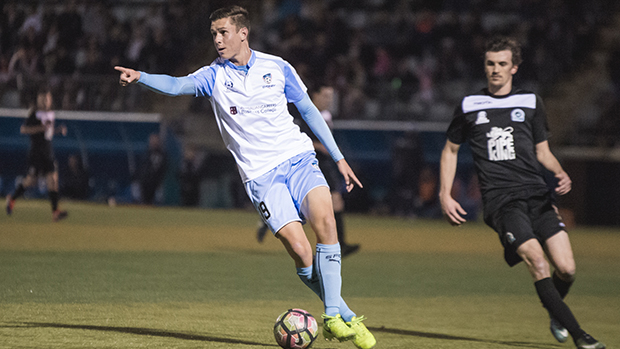 However it will be a different test up against Nick Dimovski’s Sutherland who will be out to prove their status as championship favourites. The Sharks offer goal threat across a lethal and interchangeable front four that includes some of this year’s standout performers.

The likes of Matias Da Silva Santos and Jake Borromeo have been operating on an elite level for the majority of the season and their pace and ability to create chances from both the byline and running in behind the fullback must be marshalled closely by the Sky Blues defence.

Sutherland have held the upper hand over the Sky Blues this season thanks to a 3-1 win in round 20 and a 1-1 draw in round nine, but should anticipate a different type of clash given the intensity of finals football.

The loser of Saturday afternoon’s fixture will play the winner of the day’s other semi-final matchup between Sydney United 58 and APIA Leichhardt Tigers the following weekend.