Sydney FC PS4 NPL NSW defender George Timotheou has praised Head Coach Rob Station and his focus on strength and conditioning for aiding in the Sky Blues transition to NPL 1 this season.

Surprising many with their display of football against title contenders Rockdale in round one, Timotheou credited that performance to the way the Sky Blues were drilled and prepared during the offseason.

“The result [on Saturday] didn’t show how we played,” Timotheou said.

“Against league favourites like Rockdale, we definitely surprised a lot of people with our performance, not just technically but physically.

“I think we’re in great shape, Rob has been working on that strength and conditioning side throughout the whole offseason and NYL. I thought our performance was one of the best we’ve had a squad together.

“It’s good lining up against bigger players,” he continued.

“It’s what we need. If we get a chance in the A-League it’ll make that transition an easier one having many games under our belts, and what better place to do it than NPL 1.

“Under Rob as a coach, we’ve got a good team and a good philosophy.” 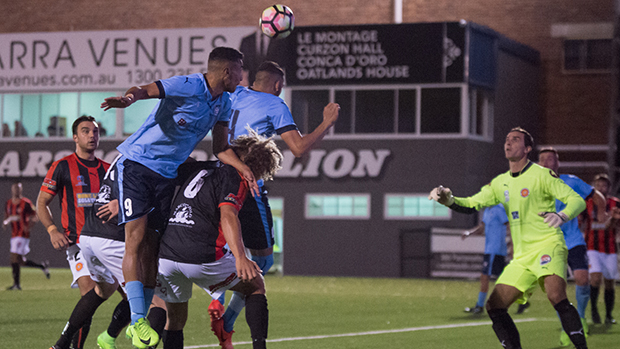 Timotheou said his consistent exposure and training with the Hyundai A-League squad had aided in his transition to NPL 1 football, and while looking ahead to Sunday’s clash against Parramatta, the Canberra born defender reflected on the differences in leagues following promotion from NPL 2.

“It’s definitely a lot more intense in NPL 1 compared to NPL 2,” he said.

“The players are a lot better, that’s why they’re in NPL 1, and it’s a good challenge for us.

“The supporter base is a lot bigger in NPL 1 too. Rockdale are a big team, their Macedonian supporter base was pretty crazy and that’s a lot different from NPL 2 where we weren’t getting large crowds.

“Having close to 500 on the weekend and that extra drive from The Cove was good. They show the support and we work hard for it.

“It’s been a good year and very productive, training full time and being in that environment. You come to training, you’re always in the gym doing pre-hab, and being on that pitch with all quality players, there’s no weak links at all.

“With me being the youngest in the team I think it benefits me a lot and I just want to keep training more and get better and better.

“I know a few players in the Parramatta team. I watched them in pre-season when they played Blacktown and they seem pretty strong.

“Every game is going to be strong, we take it one at a time and hopefully we get our first win of the season on Sunday.”

Sydney FC take on Parramatta FC at Melita Stadium on Sunday 19 March (kick off 3pm). Follow @SydneyFC on Twitter for updates from our latest NPL clash.