Sydney FC Head Coach Graham Arnold believes teams are in awe of the Sky Blues and their early season form, but he’s stressed the need not to get carried away ahead of Saturday’s Big Blue clash at Allianz Stadium (kick off 7:50pm).

The Sky Blues are unbeaten in the league so far, scoring 11 goals for the concession of none, and Arnold believes if his squad can continue their consistency then another three points is certain on Saturday night.

“I think I’ve definitely seen one of two of the teams have been in awe of us,” Arnold said.

“Newcastle played a back five last week which showed there was a great amount of respect for us and they’re in fear of us.

“At the end of the day though, we’ve got to treat every game the same and make sure we do all the one percenters right and we’ll get better.

“Melbourne come here on Saturday and come off the back off a good result, but we’ve been in very good form,” he continued.

“The boys are in a real good headspace at the moment, the dressing room is high with confidence and belief and the coaching staff have a lot of faith and belief in the team.

“What we just need to do is be consistent, be ruthless in what we’re doing and go into the game with a lot of belief and if we do that I’m sure we’ll get the right result.” 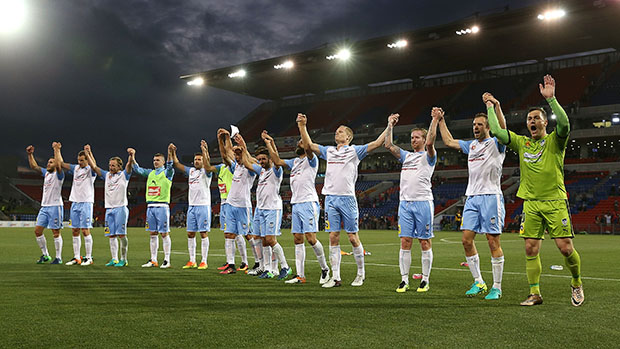 Contesting one of the league’s oldest rivalries, Arnold believes Melbourne will be one of the toughest tests yet in the Hyundai A-League 2016/17 season, however the Sky Blues boss believes he knows the key to overcoming Saturday’s opponents.

“I don’t think Melbourne will fear us,” Arnold said.

“I know they’re going to come up here full of aggression and passion, they’ve got some very good players but so do we and we just have to match that aggression.

“I don’t think they’ve got any weak points. Kevin is a fantastic coach and motivates his team very well and gets them ready and we have to do the same. For us it’s about being better than them and we’ll do that.

“We’re putting a lot of pressure on the opposition up high and that’s nullified every attack force we’ve played against,” he continued.

“It’s important upfront that we try to suffocate their build up and not give Berisha or Rojas the opportunity. If we continue to do that the way we have been then I can see them not having too many chances.”