Sydney FC will put aside their longstanding rivalry with Western Sydney Wanderers in the lead up to this Saturday night’s Sydney Derby, and partner with the red and black part of Sydney to support the Sydney Children’s Hospitals at Randwick and Westmead.

The Sydney Derby will come to life at ANZ Stadium this Saturday night at 7.50pm, with the Sky Blues representing the Randwick Children’s Hospital Foundation while their cross-town rivals the Wanderers will represent The Children’s Hospital Westmead in what should be a blockbuster clash.

The partnership between Sydney FC and Sydney Children’s Hospital Foundation extends back over the majority of the club’s history in the Hyundai A-League, and players from Australia’s most successful club have spent many hours visiting the wards.

This partnership was further enhanced last Wednesday when Sydney FC visited the hospital in Randwick and spent time with some of the sick children, while the Wanderers were at the Westmead Children’s Hospital yesterday.

Together, both clubs will be raising awareness of the fantastic work The Children’s Hospital do in supporting families and their seriously sick kids, putting football aside to raise money and awareness for kids who are doing it tough.

Some of the patients from The Children’s Hospital will be forming a guard of honour at the match for the player walk-out at the beginning of the game in what will be an experience they will cherish for a very long time.

Sydney FC CEO Danny Townsend knows the importance of the partnership and while he expects the Sky Blues to come away victorious on Saturday night, the support that both clubs are giving goes far beyond the 90 minutes of football.

“It’s a great moment when two bitter rivals can put aside the heated history on the pitch during Derby week and come together to support what is such an amazing cause in helping The Children’s Hospital at both Randwick and Westmead,” he said.

“Sky Blue players and officials have been visiting the hospital in Randwick for almost 15 years and it is such a great feeling for them to be able to put smiles on kids’ faces who are struggling each and every day.

“It’s going to be a special moment on Saturday night for all the kids involved and their families, and we are looking forward to doing them proud and giving them an enjoyable night at ANZ Stadium.” 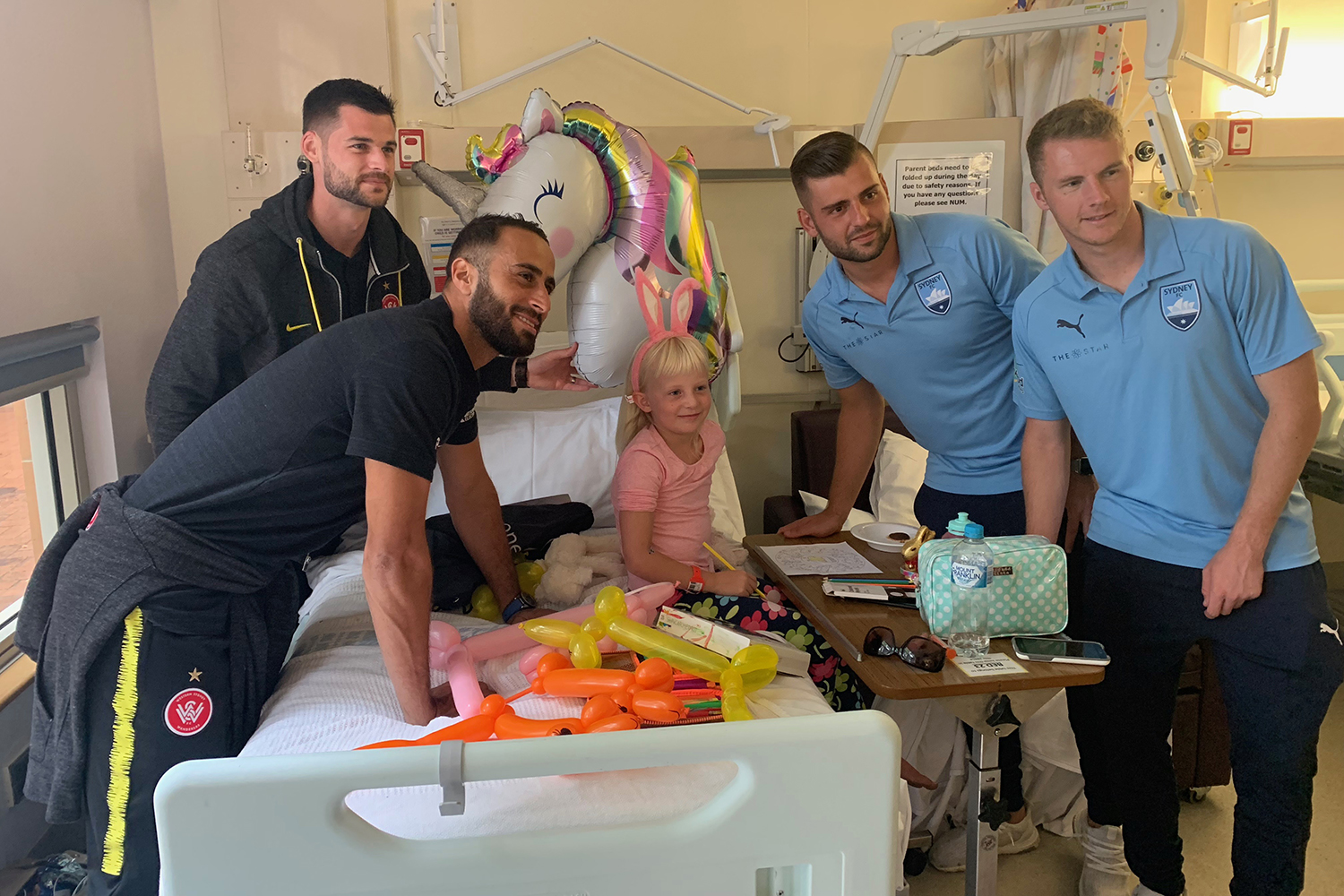 One of Sydney FC’s biggest stars Brandon O’Neill is an ambassador for Sydney Children’s Hospital Foundation in Randwick and said it is truly heart-warming to see the rivals put things aside for their local communities.

“As much as we’ll lock horns, butt heads and passionately want to beat the Wanderers in this weekend’s Sydney Derby, it’s fantastic to be able to put that rivalry to one side and support these children who take on even bigger challenges every day of their lives,” said O’Neill.

“Coming together with the Wanderers to raise awareness of the work of two fabulous children’s hospitals is a great way to use the Sydney Derby’s profile to help our local community.”

Western Sydney Wanderers CEO John Tatsimas echoed the sentiments of Townsend and O’Neill and is proud of the efforts of both clubs to come together for something bigger than football.

“It’s not often that we can come to the table with our cross-city rivals during Derby week, but we are very proud to come together to support and raise awareness for the fantastic work The Children’s Hospital do in supporting our communities,” said Tsatsimas.

“We have been visiting the hospital in Westmead since the club’s inception and it is always a rewarding experience for our players and staff.

“We hope that this Saturday we can make the families and kids at The Children’s Hospital in Westmead proud of their club.”

The match between Sydney FC and Western Sydney Wanderers will have massive implications for the visitors who are pushing for a third consecutive Premiers Plate with just a few rounds remaining.

If you would like to donate, sponsor or find out more information on The Sydney Children’s Hospital visit www.schf.org.au or connect with them on social media.