Sydney FC’s unbeaten run has come to an end after a solitary goal defeated the Sky Blues in the Sydney Derby.

Sydney FC’s unbeaten run has come to an end after a solitary goal defeated the Sky Blues in the Sydney Derby.

Brendan Santalab struck midway through the first half to hand the home side the lead going into the break, before a gritty second half played out with chances for both sides but for no reward.

The Sky Blues will feel hard done by after three penalty decisions were contentiously waved away, with Alex Brosque having strong claims denied in stoppage time with the goal beckoning.

Attentions now turn to next Friday’s encounter away, as the Sky Blues travel to face Melbourne City at AAMI Park on 24 February (kick off 7:50pm). 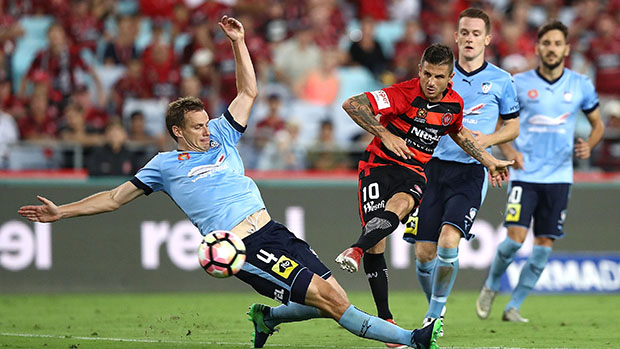 Graham Arnold: “It’s been a great journey, the undefeated run. I couldn’t be prouder of the boys. I know the players are extremely disappointed but I thought we were fantastic today, I thought we had enough changes to win 2 or 3 games.

“Our aim is to be the best team in A-League history, and we’re still in a great position for that, I think we’re having a fantastic year.

“Nineteen undefeated, what a fantastic start to the competition, now it’s about finishing it off and with the quality we showed tonight I’m very sure we’ll finish it off.”

26’ SANTALAB GOAL – Nichols crosses the ball to Santalab who is on the edge of the six-yard box.  He turns and shoots home. 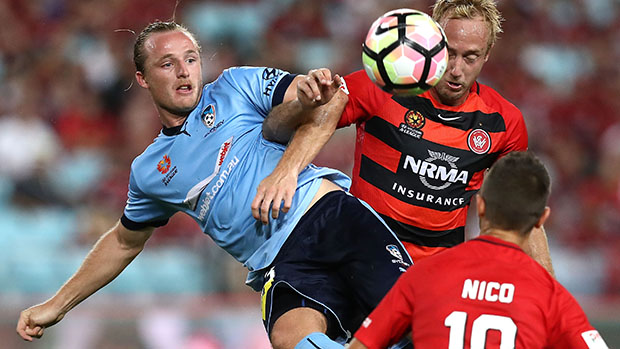 4’ VUKOVIC SAVE – Sotirio sent clear but Vukovic is down well to save to his left.

7’ HOLOSKO CHANCE – Grant chips into the box to Holosko who beats the offside trap but bouncing ball evades him and goes to Janjetovic.

16’ BROSQUE SHOT – Great play from Sydney FC to release Brosque who fires from the edge of the box only for Janjetovic to tip over the bar.

19’ BOBÔ SHOOTS OVER – Fabulous passing play from Sydney FC opens up the Wanderers defence and when Holosko cuts back to Bobô fires over the bar.

25’ BUIJS LAST DITCH TACKLE – Nichols crossese to Martinez who, with his back to goal, turns to fire a shot but Buijs gets his foot to the ball and it goes over the bar.

27’ BROSQUE HEADER – Bobô cuts the ball back to Brosque inside the area but his header is straight at Janjetovic.

40’ 1ST PENALTY APPEAL – Ninkovic receives the ball in the box shimmies and goes down under a challenge from a Wanderers defender but he is denied a penalty.

57’ IBINI CHANCE – Zullo delivers a fantastic cross from the left and Clisby clears just as Ibini looked to head home.

58’ 2ND PENALTY APPEAL – A corner comes over which Ninkovic flicks inside the box, it strikes Nichols on the hand but the penalty is waved away.

59’ BOBÔ HEADER – The ball is crossed to the far post but Bobô’s downward header is just wide.

77’ VUKOVIC SAVE – Vukovic makes a fabulous one armed diving save from Martinez.

80’ AMAZING VUKOVIC SAVE  – Martinez is free inside the box shoots but Vukovic makes a fabulous save to tip the ball onto the post.

83’ BOBÔ CHANCE – Brosque slips the ball through to Bobô who chests the ball down and volleys but Janjetovic makes a fantastic save.

90’ + 2’ 3RD PENALTY APPEAL – Brosque goes free in the box and as he shapes to shoot he is brought down but referee Chris Beath waves away a third appeal for a penalty. 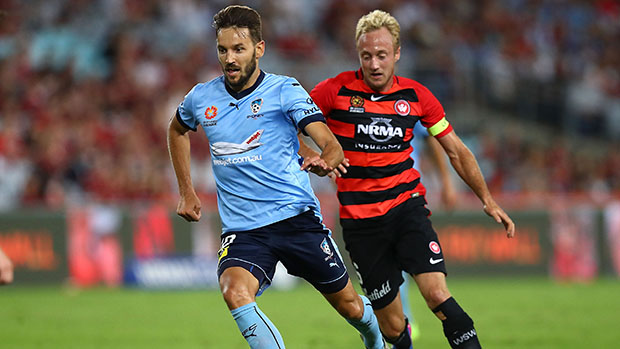 Head Coach Graham Arnold recalled Brandon O’Neill from suspension and he went straight into the midfield replacing Milos Dimitrijevic who moved to the bench in place of George Timotheou, in an otherwise unchanged side.