Sydney FC’s path to the A-League Men’s 2021-22 Championship and Premiership has been revealed, with the Sky Blues locked into eight Saturday night spectaculars and six family-friendly school holiday home fixtures.

April’s huge and potentially crucial Sydney Derby against Western Sydney Wanderers is the remaining home game of 13 with the venue for that one to be confirmed.

DON’T MISS A MINUTE – Get A Sydney FC Membership

Steve Corica’s squad begin their home campaign with their newest derby against Macarthur FC on Saturday 27th November at Netstrata Jubilee Stadium and that is followed up a week later with a Men’s and Women’s double header against Newcastle Jets at the same venue.

Members and fans can also look forward to a Saturday night Grand Final re-match against Melbourne City at Jubilee in late February (26th), while a rejuvenated Melbourne Victory are the visitors on Saturday 19th March.

The Sky Blues will host the Wanderers, Brisbane Roar, Adelaide United, Perth Glory, Central Coast Mariners and Wellington Phoenix within two school holiday periods making it a must for families and kids who love their football. 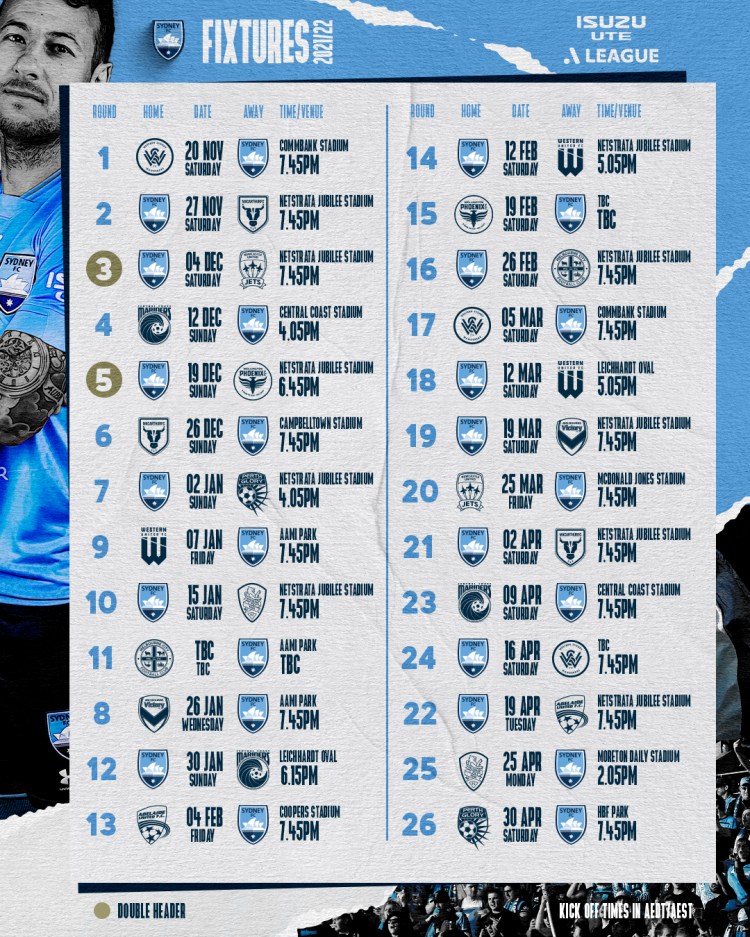 Sydney FC Head Coach Steve Corica said: “We’re looking forward to the Wanderers match which is a big game for us, Macarthur is our new derby and that’s our first home game, which is hugely exciting.

“I think Melbourne City will be good again and Melbourne Victory under Poppa [Tony Popovic] will be a lot better this year. They should be great games.

“We want all the families, our Members and The Cove to come out and get behind the boys and support us for the final times before we go back to our new stadium.

“When we fill up those hills on the side it’s an amazing atmosphere to play in both those stadiums [Netstrata Jubilee Stadium & Leichhardt Oval].”

Away highlights include the traditional trip to Melbourne Victory for the Australia Day public holiday, a Boxing Day derby against Macarthur FC, two trips to the Central Coast and a final round flight to Perth.

Tickets will be on sale for all matches up to January 15th from next Monday, 8th November.