In front of a record Hyundai A-League crowd of 61,880, a scorching second half ensured Sydney FC’s derby dominance over Western Sydney Wanderers continued at ANZ Stadium on Saturday night with a 4-0 win.

After a first half of missed chances – and an all-in melee – the derby burst into life after the break with four goals to the Sky Blues.

Two goals in four minutes to Sydney FC’s Filip Holosko and Bobo had the travelling fans on their feet.

The game ramped up in excitement as Wanderers pressed desperately, but despite the massive crowd’s backing, the red and black couldn’t find a way back.

And after a red card to Wanderers defender Aritz Borda, Brandon O’Neill calmly stroked home a peach of a free kick before Alex Brosque ended a forgettable night for Wanderers.

Re-live the game in the official match centre. 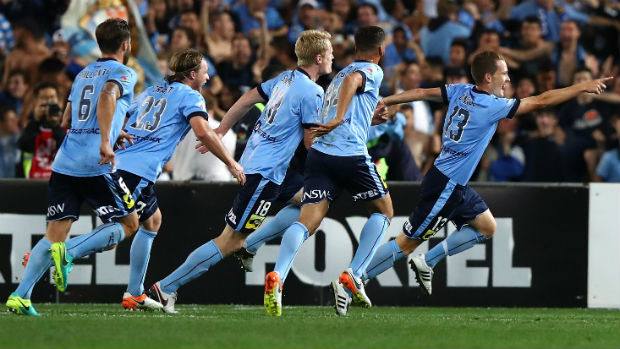 David Carney popped up on the left, his cross wasn’t dispatched by the Wanderers backline with Holosko pouncing to smash the ball home.

Holosko was again, this time as provider receiving a ball on his chest then cutting the ball back across Wanderers’ box and with a static defence Bobo slammed home to double the lead.

From the red card decision, O’Neill on the edge of the box curled a ripper past Redmayne who barely moved.

Sub Matt Simon burst through and his cross fell to Brosque who stroked it home.

Vukovic’s brilliant stop kept the Wanderers’ Mitch Nichols out at a crucial time with the lead just 2-0.

Brosque was away and on the edge of the box he was taken down by the Spaniard.