Sydney FC claimed the beyondblue Cup after defeating Melbourne Victory in the fourth annual Cup clash between the two sides at Allianz Stadium 2-1 in Round 5.

The annual clash between the Hyundai A-League’s two biggest clubs began when Sydney FC formed a partnership with beyondblue six seasons ago, for the purpose of promoting awareness of mental health prevention and management, and to fundraise for further research and program delivery.

In the lead up to the clash Sydney FC hosted a beyondblue Bash day at their training ground with special guest, former St. George Illawarra Dragons player and beyondblue ambassador Dan Hunt making a speech to the Sky Blues squad to help launch the Sydney FC and beyondblue partnership for the season. 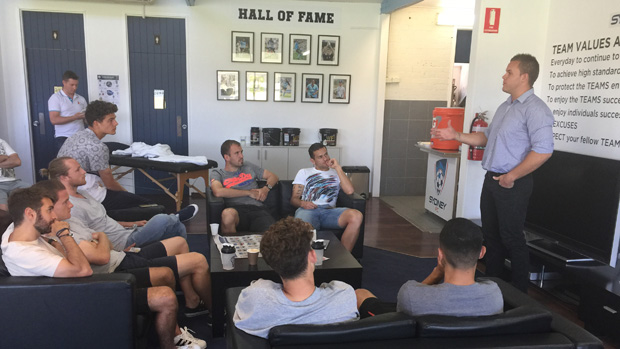 Sydney FC will also run a season-long campaign around encouraging corporate partners, Members and fans to hold their own beyondblue Bash events in a fun and meaningful way to support beyondblue’s work.

Whatever form your beyondblue Bash takes you’ll be raising funds to improve the lives of people affected by depression, anxiety and suicide.

beyondblue will host the results on a dedicated section of the beyondblue site and Sydney FC will provide inner-sanctum prizes as an incentive for fans to get involved.

People can register to host their own beyondblue Bash by registering here .

“The beyondblue Cup is a fantastic initiative and it was a great match to go with it.

“Sydney FC and Melbourne Victory are two giants of the Hyundai A-League and they have a game which always produces excitement and entertainment,” he said.

“But the key message we are trying to get across to fans is that when it comes to mental health, we’re all on the same team.

“It’s excellent to see the club associated with such a notable cause raising awareness for depression, anxiety and suicide prevention.”

On matchday beyondblue staff were in the Allianz Stadium forecourt handing out beyondblue wristbands and accepting donations from the 19,143 fans who turned out for the clash.

The partnership allows the mental health awareness group to fundraise in the lead up to the game and at the game itself, plus gain exposure to all in attendance for the game to increase awareness about a healthy state of mind.

The Sky Blues have won the trophy twice and retained it once following a draw in 2014-15, while Victory have also won it twice. We are happy to say the cup is now back where it belows for season 2016/17!